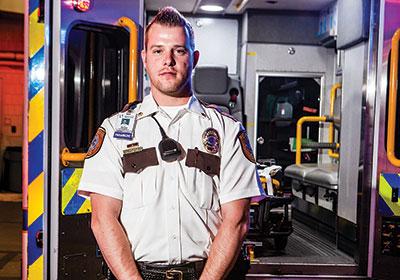 From defibrillating heart attack victims to administering morphine to those with extreme burns, the day-to-day encounters of a paramedic run the gamut. Hours of training and several certifications come standard in the emergency medical services field, but one aspect of the job is crystal-clear: “Caffeine is something of a ritual.”

Or so it is according to Jordan Wardell, a paramedic for Hennepin County Medical Center for seven years.

Average days run eight to 12 hours, although Wardell has spent 24 hours straight on the job at other institutions. And meal breaks never follow a set schedule: “Half of the time you are standing in line for your food and a call comes in,” he says.

Calls during daylight hours pertain largely to nursing homes and clinics, but the tone shifts once the sun sets.

“At night you can anticipate having more drug overdoses, violence and uncontrolled scenes, even shootings and stabbings,” says Wardell.

On top of making split-second life-and-death decisions, paramedics like Wardell often deal with other stressors. Bystanders, overcome with emotion, can disrupt a paramedic’s work—in one situation, a man, whose older brother had been shot in the chest, flipped a table when his brother started coughing up blood. So managing the general scene, as well as the patient, can be equally critical.

“We typically find ourselves in scenes where we really shouldn’t be,” Wardell says. “We don’t always have police there, or they might be en route. Sometimes you have to act as an authority.”

And for all this labor, knowledge and dedication, the national average pay for paramedics is $14 an hour, Wardell says. HCMC sits above the average with $20 base pay and room to grow, but does not provide hazard pay.

Those hazards, though, are the heart of job.

“The most redeeming factor,” says Wardell, “is knowing that without you there, it could have been a whole lot worse.”

What it’s like to be a paramedic in Hennepin County