There was a time when summer meant minor league baseball across dozens of communities in the northern Midwest. But over the decades, Major League Baseball consolidated its minor leagues in parts of the U.S. with denser populations and better spring weather. Ballparks went empty, save for fleeting independent leagues or occasional town ball games.

Cities as big as Rochester, Duluth and Madison, Wis., proved inhospitable to the charms of the Northern League (now American Association), where the St. Paul Saints play. By the 1990s, the future of baseball in small- and medium-sized cities seemed bleak. Parks fell into disrepair, and the teams that once played there were memorialized in glass cases at the public library.

In 1989, a guy named Dick Radatz Jr., son of a legendary Boston Red Sox relief pitcher, was dismissed as the general manager of the minor league Winter Haven (Fla.) Red Sox. He tried a few other things, but baseball was in his blood.

Driving north in 1992 with his eventual business partner, George MacDonald Jr., he was in search of opportunity. “I knew that the Lansing [Mich.] minor league club had done $1 million in [merchandise] sales before they even played their first game,” Radatz recalls. “We looked around and asked ourselves, ‘How can we get some of that?’ ”

Two years later, the Northwoods League (NWL) was born; it turns 25 this summer. It is the largest organized baseball league in North America. It operates in more Upper Midwest markets each summer than the MLB-affiliate Midwest League or the independent American Association (AA). It captures the imaginations of communities as disparate as Willmar in southern Minnesota and Thunder Bay, Ontario, and has crafted a business model that has allowed baseball to operate sustainably in the Upper Midwest again.

“We went in where they failed. April and May [weather] killed baseball in the Upper Midwest. We’ve brought it back,” says Radatz. “We’ve built a better mousetrap.”

The Rochester-based Northwoods League got its start in 1994, with five teams, three playing in abandoned minor league facilities. Though he initially had partners, Radatz owns the league outright today.

NWL consists of 20 teams ranging from Bismarck to Battle Creek, playing 72 games from late May to mid-August. Teams have a 35-mile distance buffer from other NWL franchises. Rosters hold 30 college players. The NWL competes for talent primarily with Massachusetts’ Cape Cod League. The fan base, say observers, is predominantly socializing millennials, much like at St. Paul Saints games.

The league office consists of six people including Radatz. He says NWL earns more revenue than any league outside MLB (many independent leagues are nonprofits) — north of $25 million last year. (This does not include team revenues.)

NWL and its teams function to make money, but the secondary purpose is to provide college players with summer experience as close to MiLB caliber as possible. “It’s a true professional baseball experience,” explains Eric Snider, assistant baseball coach at the University of Louisville. “No other collegiate summer league does that.”

“Dick Radatz runs a great league,” says AA commissioner Miles Wolff. “It may be the best of the college leagues.”

Radatz appreciates Wolff’s compliment, from his rear-view mirror. “We are marketing college baseball,” Radatz says. “Independent leagues are full of has-beens and wannabes. We are the up-and-comers.”

The Northwoods League model has its advantages, to be sure. Teams don’t own their ballparks or even exclusively hold the leases, so their obligations are to the league itself. Revenue comes from tickets, concessions and gear sales, and sponsorship dollars. All franchises are initially league-owned and purchased from NWL Inc. Teams pay the league a 5 percent gross royalty, which Radatz says covers the cost of the league’s marketing, ticketing system, webcasting and weekly television show.

A knowledgeable observer estimates the median club grosses $800,000 annually, though a franchise like Willmar may see a third of that. If there is a flaw in the ownership model, a competitor puts it this way: “It’s the same amount of work for smaller return. Instead of a $4 [million] to $5 million business [in a stronger affiliated or indie team], you’ve got a $500,000 business.” He contends that NWL’s model works best for owners with economies of scale and low overhead, with a favorable ballpark lease.

The wages of wages

“Dick was smarter than the rest of us in the vision he had,” says Terry Reynolds, special assistant to the general manager for player personnel with the Cincinnati Reds, who met Radatz decades earlier as an intern.

Most notably, smarter in the absence of player salaries, taxes or worker’s comp. These line items occupy a third of affiliated and independent teams’ expense profile, says Wolff.

“You’re marketing the same product, but without that expense,” says Bill Fanning, a Saints executive from 1992-2004 and now president and general manager of the St. Croix River Hounds, an NWL expansion team set to begin play in Hudson in 2019. “Back in the day, we had $300,000 to $350,000 player personnel expense in independent ball.”

Which means: “You can draw 500 and make money on the game,” notes Wolff.

Radatz is not shy about trumpeting it — “Our budgets are one-quarter to one-half of an independent team.” He does not dispute that some franchises are relatively low-revenue businesses, but says that “because of the nature of the business, it’s hard to lose a lot of money.”

That notwithstanding, NWL has quirks:

Radatz says NWL has shuttered or moved franchises out of Alexandria, Austin and Brainerd in Minnesota; Dubuque, Iowa; and Manitowoc, Wis., due to a mix of facility problems, natural disasters and inadequate local support.

Communities are often urged to invest in their local ballparks when NWL considers expansion. Radatz is not able to offer a lot about economic impact, but he did share a 2009 city of LaCrosse study that quantified the value of its NWL franchise and ballpark. The city found $1.1 million to $1.3 million in NWL-related spending, plus $500,000 in team spending.

The fuel that makes the NWL work is its connection to NCAA Division I, II and III college baseball. (MLB drafts 80 percent of its domestic players out of college.) It provides the league with players, an exemption from wage and workers’ comp obligations, and a substantial part of its fan appeal. After all, who doesn’t want to go cheer for a student in pursuit of a dream?

NWL summer roster spots are considered an internship. Radatz says 180 NWL players have been drafted into MLB, with 23 going on to the majors.

It’s still a difference-maker. “Summer collegiate leagues have a very prominent role [in MLB] thanks to Dick,” says the Reds’ Reynolds. “It gives MLB the opportunity to evaluate good players in representative settings. MLB scouts are at almost all the games.”

“We have changed the experience of college summer baseball,” says Radatz. “In the past, there were inadequate slots for players. They played town and Legion ball. Now part of the expectation is you will play in an organized summer league.” Historically, collegiate summer leagues played shorter seasons, and in the Cape Cod League, at least, road trips are short. NWL, by contrast, takes just three days off in its 11-week season. 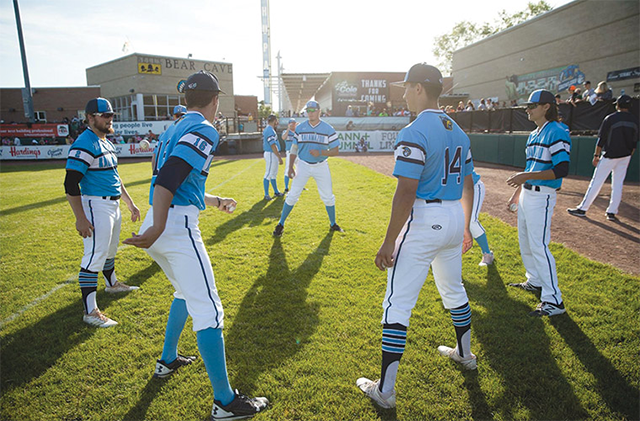 It “replicates [minor league] baseball,” says Reynolds. “There’s long bus rides, they play every day for former MLB managers and coaches. And they use wood bats, which is representative of MLB hitting.”“The grind separates the men from the boys,” adds Radatz. If players can make it through an NWL season, it says something. “You have kids who say they want to play professional baseball,” says Louisville’s Snider. “Well, do you have the stamina for this?”It’s not all adversity, though. NWL players spend weeks living in the homes of volunteers in the local community, sharing meals and occasional quiet mornings. “Our host families are folks who want a role model for their younger kids. Or an empty-nester with an extra bedroom,” says Willmar’s Voz. “It creates lifelong friendships.”

NWL (read: Radatz) owns all expansion franchises, which are priced at $1 million, though Radatz says that figure can drop for various reasons. Currently NWL owns franchises in Battle Creek and Kalamazoo, Mich., Bismarck, N.D., and Rockford, Ill.In 1997, Radatz bought the Rochester franchise for $125,000 and says he sold it for $700,000 in 2003. He used the proceeds to buy out his partners and take sole control of the league.NWL takes 5 percent of each team’s gross. Radatz reinvests much of it in NWL’s cable TV show, a proprietary ticketing system, video capability, game streaming, software, websites and a mobile app. NWL is technologically leaps ahead of most independent leagues. Radatz is eager to build out an advanced metrics system in NWL, noting that MLB organizations pay the Cape Cod League for its data. Radatz says league revenue streams have grown sixfold since 2003.

Though Radatz spends much of the year in Florida honing his golf game, he has paid his dues in the NWL, and the benefits he’s accrued are due to his own ingenuity.

“His dad was a pitcher, so he had a great feel for the game,” says Reynolds. “He never took himself too seriously. He likes hard work and having fun.”

“Dick has been very forward-looking,” says Voz. “It’s a brotherhood of teams. We work together. We just compete on the field.”

Others admire Radatz more grudgingly. “His model works best for Dick Radatz. The league office gets a bigger cut of everything,” says the AA’s Wolff, who notes his league office is nonprofit.

Radatz is unapologetic, noting he never wanted to experience another severing with the game he loved like he experienced in the Florida State League. “We structured it this way because we wanted to keep our jobs,” he says with a laugh.

Into the big leagues

Radatz expects NWL to expand by two or more teams in 2019. “It tells you something about our product,” he notes, “when Bismarck sells out 27 of 36 games in its first season.”

Though Radatz touts the growth trajectory of small and medium-sized Midwest cities, NWL is already in the ones that don’t host affiliated or independent ball. So he’s set his sights where the rest of the people are—the major metro areas.

He is eyeing Waukesha, Wis., outside Milwaukee, for a team, and touts the St. Croix River Hounds, which will begin play in 2019 on the site of the old Hudson dog track, which was being scrapped at press time. Hounds general manager Fanning expects a $15 million ballpark to be structurally complete before the snow flies.

This is a new model for NWL: a multimillion-dollar ballpark financed by team owners. The potential complications and challenges are myriad (see “The Big City Gambit” above).

Is Radatz wary? He shrugs. “I was skeptical of Willmar and Wisconsin Rapids,” he says. “It’s a new paradigm for us, to be sure. But we have changed the game. It’s as simple as that.”