The Market at Malcolm Yards drew a good deal of local attention long before its official opening in July. Originally slated for 2018, the food hall promised to rejuvenate the raffish Minneapolis neighborhood north of University Avenue between Stadium Village and Prospect Park.

What few realize was that the food hall was rather incidental to the developer’s grander plan for the area. When John Wall first happened on the 20-acre parcel of land near the old United Crushers grain elevator, he initially planned to transform it into a research park for the University of Minnesota, whose East Bank campus is steps away.

Wall, president of Minneapolis-based developer The Wall Cos., says the U could have benefitted from such a venture. Research parks are generally filled with private companies that can help commercialize university research. “Research parks pop up adjacent to research universities all over the world,” he says. “As a matter of fact, every major public research university in this country has a research park near it, except for Minnesota.”

So he took a step back and proposed starting out with new apartment buildings. His aim, he says, was to “show that life exists on this side of the [campus-to-campus] transitway.” The Wall Cos. purchased land and got to work. A food hall would show the neighborhood’s promise, he reasoned.

“We went around the country, talked to developers, and got ideas for what a food hall could do for a community,” says Patricia Wall, owner of the Market at Malcolm Yards (and married to John Wall). She says she got inspiration from a trip to a food hall in Vancouver.

Food halls not only help rejuvenate neighborhoods, they also function as incubators for local chefs. Patricia Wall thinks this one has the potential to change the local restaurant industry for the better, acting as a “market correction” for the industry, long plagued with razor-thin margins and high operating costs. (Keg & Case Market in St. Paul and the North Loop Galley beat Malcolm Yards to market with the concept.)

Tucked into the Malcolm Yards food hall are nine restaurant concepts, one of which is owned by the Wall Cos. Patricia Wall says each of the proprietors has signed a two-year agreement to pay Wall a percentage of sales. In her view, the market stalls are a low-barrier, low-risk way for chefs to road-test their ideas. “Chefs don’t have to go into debt to build their kitchens,” she says.

But the market is only the first phase of development at the site. Next on the docket is a pair of adjacent apartment buildings to be known as the Flats at Malcolm Yards and Malcolm Station Apartments. The latter building will include 7,800 square feet of commercial space. As for the rest of the land? That’s still to be determined, but John Wall says it will likely be more residential, with a possibility of some future office space and life sciences buildings. He says there are also plans for a “significant arts program,” which could include entertainment venues. The market will remain the “centerpiece of the neighborhood,” he says (though the adjacent Surly Brewing and the new O’Shaughnessy Distillery might contest that title).

“My thought in doing this food hall was, ‘What is going to make people want to get in their car in the dead of winter and drive down here?’” says Patricia Wall. “What’s going to be worth it? If the food is exceptional and there’s a lot of variety, they’ll want to keep coming back. 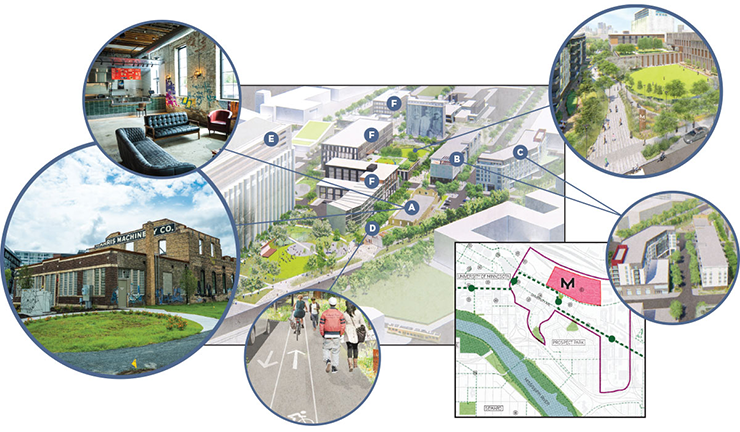 A) The Market at Malcolm Yards: The 19,000-square-foot food hall that developers expect will become the “centerpiece” of the development.

B) The Flats at Malcolm Yards: A six-story, 143-unit apartment complex. Slated to break ground in spring 2022.

C) The Malcolm Station Apartments: A seven-story, 210-unit apartment complex that will include 7,800 square feet of commercial space on the first floor. Slated to break ground in December.

E) The now-empty United Crushers grain elevator, which is slated to remain on-site for historical reasons. “We have some people who are interested” in a development on top of the building, John Wall says.

F) The remaining buildings are still to be conceived, but Wall says they’ll likely include a “large residential component,” entertainment venues, and perhaps life sciences buildings, fitting in with the developer’s original plan for a research park.

The plan for Malcolm Yards goes well beyond a food hall