News
Two Cities
This coverage is made possible by a grant from The Saint Paul Foundation.
Jan. 6, 2012 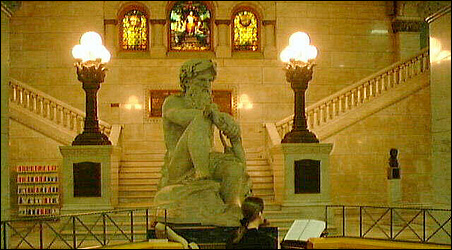 Creative Commons
There used to be a lot of good reporters wandering around Minneapolis City Hall asking questions and listening to the debate of the day.

Walking back into Minneapolis City Hall last fall for the first time in more than 30 years offered a stark contrast to the experiences I had there as a reporter in the late ’70s and life as we know it today.

Back then, most news organizations were still operating on the beat system. A City Hall reporter went there every day looking for stories. We all had our sources, and we all knew how to gossip.  Most days, we could find something that would get us into the first five minutes of the newscast or on the front page of some section of the newspaper.

City Hall was a good beat. And there were a lot of good reporters wandering around asking questions and listening to the debate of the day. City Council meetings drew a crowd.

When I covered the beat for WCCO-TV, there would be a half-dozen newspaper reporters, two or three television stations and a few folks from radio. You had to come early to get a seat and a place for your camera.

Where’d all the reporters go?
Now when I head to City Hall to report for Two Cities, I find myself missing that crowd of reporters. Most days now, I see Steve Brandt from the Star Tribune. Steve is an excellent reporter, but he’s moving to a new beat. Sometimes the Star Tribune sends Eric Roper, who is also good at his job. By my count, that’s three of us at City Hall. I see other people taking notes and, occasionally, a television videographer but never with a reporter.

Back in the late ’70s, those who inhabited newsrooms and city rooms believed news folks needed to make decisions about what stories were important in their lives. And we believed that government news was high on that list.

Then someone invented the focus group – one of those gathering of citizens who are given nice snacks and asked to share their opinions on a product. One of the “products” they analyzed was the television news operation where I was a foot soldier.

What these citizens often said was that they did not want so much government news. They especially did not want Minneapolis City Hall news or St. Paul City Hall news, because many of them lived in the Happy Suburbs. News from the core city did not apply to their lives. Or so they thought.

They wanted more trend news. They wanted news about interesting people. They wanted news they could use. Many said they had moved to a Happy Suburb to get away from Minneapolis and St. Paul and did not want to waste their time on the troubles of life in the big cities.

And, in large part, they got what they wanted.  But the retreat from government reporting was slow.  Old habits die hard even in newsrooms. City Hall reporters still knew how to find a story, but the prominence the story received started to sink from Section One of the newscast to Section Two.

My newspaper colleagues were high-minded about their dedication to government news until their editors discovered focus groups, too.  Then it got a little harder to get that government news on a section front.

Different times, technology
Times and technology change. Now, those Minneapolis City Council meetings are telecast on Channel 79.  You can watch from the safety of your own living room as council members debate the fees to license a dog or work their way through the budget.  But you can’t ask questions after the meeting like a reporter can if they are in the building.

And if there are two competing reporters in the building, you know that each of them will be trying to get something for their story that the other won’t have. News is still a competitive business — which is why I miss that crowd of reporters.

When reporters do their jobs well, the big winners are the people who know a little more, understand a little more and can make some good decisions because someone asked important questions on their behalf.  That part of the news business has never changed.