News
Two Cities
This coverage is made possible by a grant from The Saint Paul Foundation.
Feb. 17, 2012 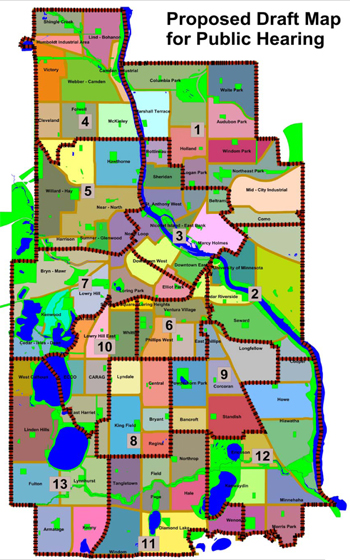 With its latest revisions complete, the Minneapolis Redistricting Group is ready to present its proposed ward maps for public input.

Here’s a look at some of the latest changes:

The Somali and East African immigrants would get a ward where a majority of its residents are minority members, but in the process, the redistricting commission’s proposed plans end up splitting the Somali community between two wards.

The new Ward 6 would have a population that is nearly 34 percent black and 20 percent Hispanic. The ward would include the western end of the Cedar-Riverside Neighborhood, which is home to many from Somalia and East Africa, but does not include the eastern end of the neighborhood or the area just south of Interstate 94 that has many African residents.

Members of the Redistricting Group are eager to create a second city ward that has a majority of minority residents to increase the chances of minority representation on the City Council.

“I would put before you that the characteristics of the Minneapolis population have changed quite a bit,” said Hazel Reinhardt, a demographer hired by the Citizens Committee for Fair Redistricting, which represents residents from Somalia and East Africa.

“The new realities are not going to take us back to where we were,” said Reinhardt, who worked with the African group to create their own version of a new Ward 6.

Ward 6 is currently represented by Robert Lilligren, one of two minority members serving on the Council.  He is an American Indian. Ward 6 does not currently have a minority majority. Ward 5, with a majority of black residents, is represented by Don Samuels, who is black.

Members of the Redistricting Group listened to suggestions about how the African community could be kept together in one ward but decided to keep the boundaries as they are for now to give the community at large two weeks to study the new maps before two upcoming public hearings.

Anticipating that the public hearings will produce more requests for changes, they decided to get more input before moving any more lines. They also acknowledged that the new legislative districts maps — due out Tuesday — could also dictate the need to change ward boundaries.

The group also spent several hours moving lines on the city’s proposed 13 ward maps. They started by moving the proposed line between Ward 1 and Ward 3 in northeast Minneapolis.  They also moved the lines between Ward 5, which is north Minneapolis, and Ward 7, which includes half of downtown and the neighborhoods around Cedar Lake and Lake of the Isles.

They debated using major streets as ward dividing lines. They noted that even though streets are natural boundaries, using them for boundaries can end up splitting neighborhoods and business districts.  They also suggested that splitting groups into two wards could give them two advocates on the council instead of one.

Trying to fine-tune the maps, they also adjusted the lines around Lakewood Cemetery and the Rose Garden, even though no one lives.

Two hearing to get public input on city redistricting have been scheduled: