Alderman Van White’s legacy runs a lot deeper than his distinction of being the first African-American to serve on the Minneapolis City Council.

I was a City Hall reporter when he was elected in 1979. He was not given to fancy speeches, and his ego could have used some serious inflation.

When I heard about Tuesday’s celebration scheduled for the Van White Paving and Bridge Project, I thought it would be easy to write a short profile of the man I had written about all of those years ago. Not so.

If you search for Van White on Google, you will get lots of information about square-shaped white vehicles. I found nothing on the City Council web pages and was ready to give up when the Hennepin County Library Special Collections people answered my email and said they had some material about Alderman White.

Some material but not much. One envelope, with a few newspaper clippings and a magazine article.

There’s also some information on the Minnesota Historical Society site, including an overview of his papers and career.

Fortunately, I know some of the people who served with White on the City Council and tracked down his wife and daughter at the paving and bridge project celebration.

One newspaper story contained in the envelope quoted the late Harry Davis, former Minneapolis School Board Member, who said of White:  “His life shows that you can be born and raised in poverty but that doesn’t mean you can’t achieve your goals. But you’ve got to work.  Van was a hard worker.”

White was raised in poverty. When he was 10, his father died, leaving him the oldest of five children in the household.  He graduated from Patrick Henry High School and worked as a laborer before being hired by the Minnesota Department of Economic Security as an employment interviewer.

Another newspaper story, this one from Insight in 1992, quoted White’s advice to young people. “Listening is the key to opening doors,” said White. “One must listen.”

And he did listen. And he asked questions. And he decided what needed to be done and went about the business of getting his colleagues to help.

“He did his homework and made sure he understood the issues,” said former Alderman Sally Howard, who served with White. “He looked at the whole problem, looked at all sides and then made up his mind.”

(I should point out that there has been a title change for City Council members since those times. In Sally Howard and Van White’s day, the title was Alderman. If you were a woman, you were still an Alderman. The title now is Council Member, which covers everyone.)

Howard said White was a great addition to the City Council because he brought new viewpoints to the mix and because he was such a presence on the North Side.

“He was a joy to work with because he was such a gentleman,” said Howard, “and she, his wife, Javanese, was one of three beautiful sisters.  I really, really liked him.”

“Van was one of the original voices urging the city to be mindful of the people of color,” said Josie Johnson, who describes herself as a community activist, which is a little like calling President Obama an elected official. 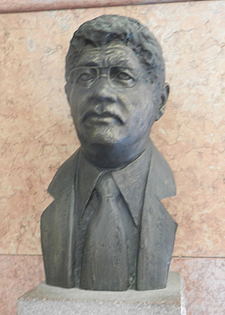 MinnPost photo by Karen BorosThe plaque below the bust of Van White at
City Hall reads: “If I have helped just one
somebody, then my life and my living have
not been in vain.”

‘His effort was to preserve the community,” said Johnson of White. “North Minneapolis had the kind of history and beauty the city could be proud of. He saw the lack of attention that part of the city received.”

She said White worked hard to make sure building codes were enforced in the area and that city services were delivered in a timely manner.

“His contribution to the City Council was we had somebody of a different color who had a very different prospective on the North Side,” recalls former Alderman Walter Rockenstein, who also served with White. “He brought a real passion for attacking the core problems of the North Side.”

“He really thought we had to spend time and money on the North Side, and he was right,” said Rockenstein.

He told the story of how his Republican colleagues sent him to tell White that they agreed about the serious problems on the North Side and that they needed to help him solve those problems.

Rockenstein thought the meeting with White would last 15 minutes, but it went on for more than an hour. No one from White’s DFL party had bothered to ask him what he thought needed to be done, and White had plenty to say on the topic.

“Van and I spent a lot of time working together,” said Rockenstein, who added that the two became “close friends.” despite starting on opposite political sides.

Back in those days, Rybak was a reporter watching White bring a different set of values to City Hall that had been a long time lacking.

“He didn’t do anything too extreme,” said Rybak. “He was simply somebody who had lived a full live, who brought a whole set of experiences, wasn’t just a politician and, I thought, always talked from a position of common sense.”

I also knew Van White. As a reporter, I learned he was not the type to make any big speeches during council meetings. During interviews, he would answer my questions and then ask me what I thought. Reporters don’t have thoughts — we just have questions.

But one time when I went to his house for an interview, we got to talking about the importance of homes. He wanted to know where I had grown up and if I still had family there and how often I visited my original home. Those were questions I could answer.

And then I asked about the importance of home for him, and I still remember his reply.

“You need a place where you can go and put your head down,” he said. That was more than 30 years ago, and I still think of that quote. And this is the first time I have used that quote in a story.

The small collection of articles I was handed by the woman in the Special Collections section of the Hennepin County Central Library contained a gem.

Twin Cities Magazine from November of 1979 had a short interview with then-City Council candidate Van White.  Here’s an excerpt from the interview:

“I don’t have any political aspirations,” he said, “I’m too old for that.”

“My children grew up here.  We need to get better schooling for the children.  We need to get economic development in the ward to provide some solution to the unemployment.  What I want to see is Plymouth Avenue and West Broadway lined with small businesses, the ma-and-pa stores, where people can make a living.” …

He was asked about the upcoming election.  There were three candidates, and all three were African-Americans, which guaranteed that the City Council was about to add its first member of color.

“Whether it be me, God willing, or one of the others, it will open doors for others in the future, as others opened the door for me.”

“Change comes slowly.  Twenty years ago no one would have imagined there ever being a Black alderman, just as now it’s hard to imagine a woman or Black as President.”