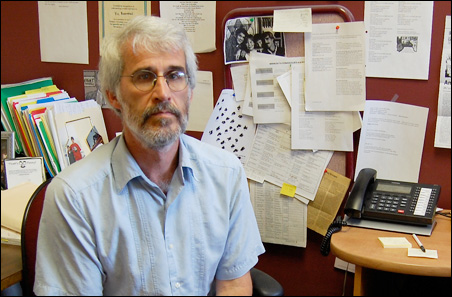 Three buses with about 130 people will roll out of Temple Israel in Minneapolis Sunday morning for a four-hour trip to Postville, Iowa, to draw attention to a raid on a kosher meat-packing plant that has come under fire from immigration reform groups and members of Congress.

They will join similar groups from Chicago and Wisconsin at a rally and march in support of the immigrant workers from the Agriprocessors plant who were arrested in the May 12 raid.

Critics of the raid object to the immigrants’ group prosecutions that they say violated due process. The decision to disproportionately go after workers instead of employers has also been attacked.

“Workplace justice and comprehensive immigration reform” are the reasons for the event, Vic Rosenthal, executive director of Jewish Community Action in St. Paul, a social justice group spearheading the rally, told me in a video interview.

There have been other raids on food processing plants, but the one in Postville was unusual: It was the largest action of its kind to date, with nearly 400 immigrant workers taken into custody. And rather than immediately deporting undocumented workers, government officials chose to first charge the detainees with a range of crimes, including use of false Social Security numbers, illegal re-entry into the country and fraudulent use of alien registration cards.

Most of the workers accepted plea agreements on the lesser charge of Social Security fraud and now face five months of jail followed by deportation, resulting in major problems for their families as well as the town of Postville itself.

Vic Rosenthal: The rally is about “workplace justice and comprehensive immigration reform.”

Congressional hearing
Meanwhile, lawmakers in Washington, D.C, on Thursday questioned the legality and effectiveness of the government’s tactics in the raid, according to the Associated Press.

The workers were given seven days to decide whether to accept the plea agreement, and they appeared in groups of 10 at the plea hearings.

“This looks and feels like a cattle auction, not a criminal prosecution in the United States,” said Rep. Zoe Lofgren, D-Calif., a former immigration lawyer and chair of the House Judiciary subcommittee on immigration, which held a  hearing Thursday on the raid.

Focus on working conditions
Rosenthal told me that his interest in Postville began two years ago when he, along with a delegation of Jewish leaders led by Rabbi Morris Allen of Beth Jacob Synagogue in Mendota Heights, traveled there and met with Agriprocessors owners to discuss allegations of abusive working conditions described in an article published by the Forward, a major Jewish newspaper in New York.

Rabbi Allen, from the Conservative movement, advocates an initiative called Hekhsher Tzedek, which is recognized by some as a “supplement” to the interpretation of kosher certification to assure not only that methods of inspecting and slaughtering animals are in accordance with Jewish law, “but that the food is produced in a way that demonstrates concern for those human beings who are involved in its production.”

After several meetings, the delegation was frustrated because while the company listened to their concerns, they were only willing to make “very tiny little changes,” Rosenthal said. “The reality is that they were really not willing to recognize that there were real problems with the way workers were treated.”

Since the raid, the issues have expanded from kosher practices and workplace conditions to immigration policy, according to Rosenthal.

On Sunday, bus riders will be offered information sessions about immigration, workplace conditions and Hekhsher Tzedek. An interfaith service at St. Bridget’s Catholic Church in Postville is planned, followed by a march to the gates of the plant, where those attending the rally will urge Agriprocessors to support the detained workers and their families.

The small town of Postville (pop. 2273) is expected to get national media attention Sunday, but Rosenthal said he hopes the crowd is manageable and stays focused on the issues of workplace justice and immigration reform.

“We don’t think it’s fair to overrun the town and give them more headaches than they already have now.” he said. “We want to do this in a way that’s consistent with what their needs are and not simply impose our will on a town that’s already been through a very difficult situation.”

Look for my video report about the event Monday on MinnPost.