I lived a few blocks from the row of metal houses on the 5000 block of Nicollet Avenue in Minneapolis for many years before I paid any attention to them. I took more notice about eight years ago when my daughter Emily, who was studying architectural history, told me about how interesting they were. 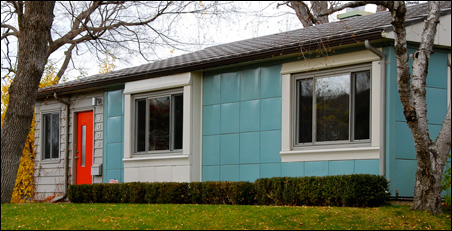 About a year ago, I was driving down that block and the afternoon sun reflected off one of the houses like a flashbulb. I was intrigued and decided then that I wanted to learn more about these odd Lustron houses. 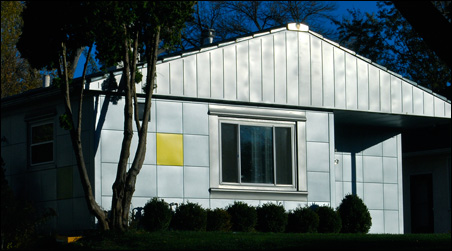 When I found out they were not only porcelain-enameled steel on the outside, but were metal on the inside as well, I wanted to get inside one. 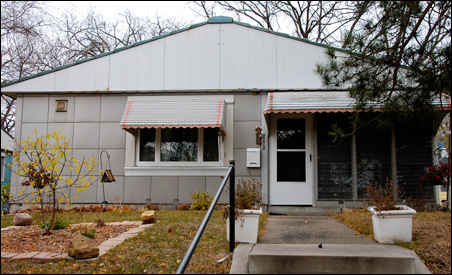 Buck Holzemer owns the blue house that flashed me that day. A mutual friend introduced us recently and he gave me a tour of his 1950, 1,000-square foot, baby-boomer beauty. 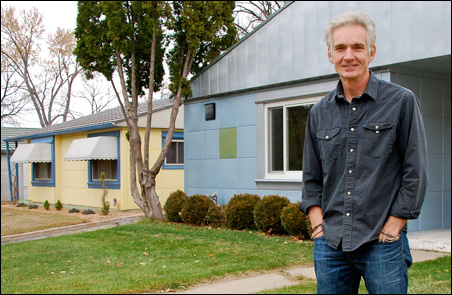 The Lustron Corp. began to design houses in 1947 and marketed them to GIs returning from World War II. There were nearly 3,000 of these enameled-steel homes constructed between 1948 and 1950. The low-maintenance exterior, invented by Carl Strandlund of Chicago, had the color baked in. It was meant to appeal to the modern post-war family. Holzemer likens the exterior panels to “the top of your stove.” 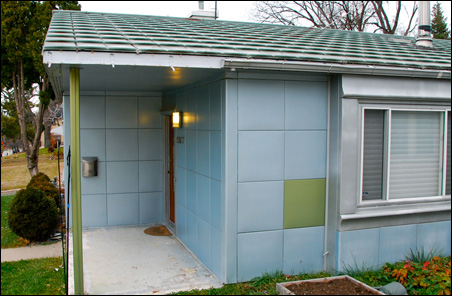 MinnPost photo by Steve Date
Roof as well as siding are all metal.

According to the Lustron Preservation Organization, about 1,500 Lustron houses nationwide still stand. Many of these have fallen into disrepair, but owners such as Holzemer are trying to preserve them in an authentic way as much as they can. This can be difficult, however, because of the unique design and unusual use of metal throughout. Some owners gave up on being true to the original idea and made changes such as putting vinyl siding over the metal finish. 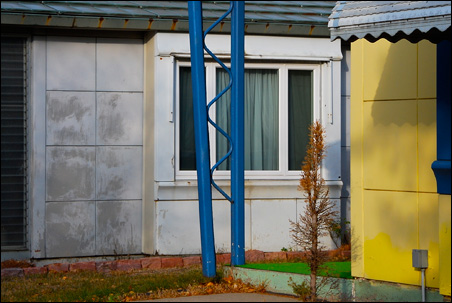 MinnPost photo by Steve Date
Maintenance and painting of metal panels has been problematic. Note also the distinctive decorative trellis.

Holzemer removed the siding on his house to expose the original metal. But this caused multiple new problems because of holes in the metal and the difficulty of painting over it. He also fixed a bad kitchen remodel by a previous owner and installed a new heating system among other things. 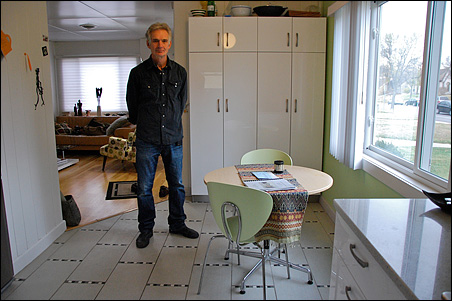 When Holzemer bought the house, he was attracted to the simple, clean, mid-20th century modern style, but he had no idea how much work it would be to restore and maintain.  He laughs and says he probably wouldn’t have done it if he’d known what he knows now.

In this video, Buck Holzemer gives me a tour of the inside of his Lustron house and talks about the restoration and repair work he’s done.