Unless you’re a truck driver, you probably don’t think much, or at all, about where semi trailers get parked. Like a lot of infrastructure, most trucking takes place out of sight and out of mind, in industrial areas or at warehouses on the edge of town.

That’s why Andrea Jenkins, Ward 8 representative and Vice President of the Minneapolis City Council, took notice of all the trucks that started appearing in her neighborhood in recent years. They were nearly always there on South Nicollet Avenue, more appearing each year. So she began working on a solution.

“One of biggest problem areas in my ward is at Lake and Nicollet,” explained Jenkins. Almost any day, you go there and see tractor trailers lined up 30 deep on Nicollet Avenue. It really creates barriers for people to be able to see round corners and coming out of driveways.”

Truck parking has become a minor nuisance in both Minneapolis and St. Paul. For years, I’ve been scratching my head about the constant sight of trucks parked on Marion Boulevard right next to the NO COMMERCIAL VEHICLE PARKING sign. According to St. Paul’s Department of Safety and Inspection, they log about a dozen truck parking complaints a month, often in the same few spots around the city with regular scofflaw parking. For example, there are recurring and identical complaints about trucks parked on Eustis Avenue by Highway 280, Fuller or Thomas Avenues in Frogtown, or Ruth Street on the East Side.  The complaints repeatedly state that these trucks cause problems because they block sight lines, block bus stops, idle for hours in residential areas and generally make it much harder for people to drive or walk in the area.

In 2019, the Minnesota Department of Transportation completed a lengthy study on truck parking, looking at its challenges and trends. In the big picture, truck tonnage has gone up 24 percent over the last ten years. In the meantime, new safety regulations require truck drivers to limit their hours and park more often (a good thing!) while industry trends have seen decentralized “owner operators” assume a greater share of the trucking pie. The result is that demand for truck parking increasingly outstrips supply as more trucks are parked more of the time.

From the truck drivers’ perspective, parking is an added cost and hassle. Finding cheap  (or free) parking is not easy. Reading through a trucking message board, many truckers live in dread of a having their doors knocked on by private security guards. Meanwhile, popular trucking apps like Trucker Path list regional parking availability; for St. Paul, the closest listed sites are truck stops in South Saint Paul, Oak Park Heights, or Eagan.

(Other sites, like the Mall of America, are less official; reports of being able to park near the Ikea store vary, with many truckers complaining in the comments of dealing with “mall cops.”)

Because many more people own their own rigs these days, without a central parking lot, marginal city streets become an obvious place to go. That means nuisance issues and safety concerns for people living nearby.

Parked trucks and trailers might not seem like a big deal to most people; if you don’t have to live or work near a bunch of them, you might not notice the problems they pose for street safety. But as Jenkins points out, they do cause issues for other users of the public street.

“Oversized trucks parked on city streets block sight lines,” Jenkins explained.  “They create opportunities for nefarious activities, people kind of get lost behind them as well as wintertime they idle for long hours. It really became a public nuisance.”

Last month, after completion of a two-year study, the Minneapolis City Council passed a sweeping ordinance that bans truck parking citywide. The discussion mostly centered on its impact on owner-operators, about 40 percent of whom are people of color according to the City of Minneapolis. That conversation led to an amendment supported by Council Member Jamal Osman to reduce initial penalties and help educate truck drivers about the policy.

“I do appreciate Council Member Osman’s amendment to the lessen the initial blow,” said Jenkins. “A lot of these divers nowadays are foreign-born, primarily East African or Somali, and we definitely are not trying to disrupt people.”

Moving the problem down the road

One consequence of Minneapolis’ new policy will be to push more truck drivers to find parking in nearby cities. For example, St. Paul, right next door.

That’s one reason why St. Paul City Council President Amy Brendmoen has said she is going to try and “fast track” a city policy addressing the same problem, making it easier and more common to enforce truck parking bans.

“There’s a need for semi parking but it can’t be willy-nilly all over the streets,” said Brendmoen. “There’s a lot of reasons why it’s problematic; in particular, for us this is pothole season coming into street sweeping season and plowing season. Those are heavy pieces of equipment and they do have a larger impact on our roads.”

Just as it was an issue for the city’s unorganized garbage trucks, the basic physics of pavement means that large vehicles, especially trucks with payloads, cause exponentially larger damage to city streets than regular passenger cars. For a city already struggling with basic street maintenance, a regional influx of trucks would exacerbate existing problems. 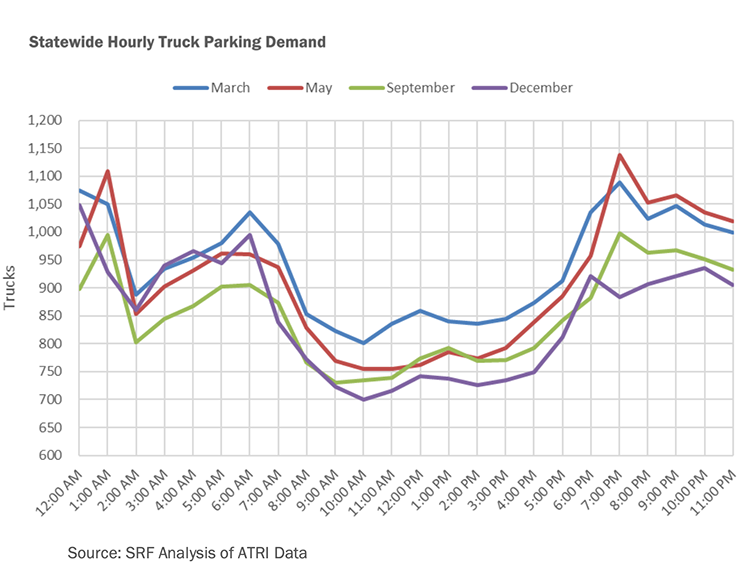 For Brendmoen, it’s a sign of a larger problem. Increasingly, businesses have turned to the “gig economy,” and more and more industries are relying on “self-employed” workers to do jobs that otherwise would have been part of a larger operation. The rise in small trucking operators is one example but there are others, like package delivery, Uber and Lyft drivers.

“From time to time I think about Amazon or other delivery services that heavily impact the use of roads in our city,” explained Brendmoen. “As we move away from brick and mortar [stores] into gig work, there’s no entity that’s contributing to our property taxes that actually pay for that upkeep of our streets. People say the police should do a better job of tracking down these porch pirates but I’m [think] the Amazon business model is messed up.”

Yet online shopping, loading zones, delivery van congestion, and doorstep delivery are city problems for another day. For now, focusing on the highly visible tractor trailers lurking on the margins of the city’s streets will have to do.

With truck parking now banned in Minneapolis, semi drivers will have to look down the road