Over the years, every time I’ve even hinted at the possibility of removing I-94 between Minneapolis and St. Paul, I’ve been met with blank stares. People are dumbstruck for a solid minute, before muttering: “Where would the cars go? Don’t we need it?”

Throughout my lifetime, it’s been easier to imagine flying cars than to imagine the end of I-94. But that might be changing with a new campaign that aims to shift the horizon of possibility for the Twin Cities’ most-used roadway. A group of activists wants to put the possibility on the table — turning I-94 into a regular surface street — bringing the Twin Cities onto the cutting edge of 21st century urban planning where freeway removal is a commonsense idea.

These days, it’s generally agreed that building central-city freeways was a mistake. These eminent domain projects triggered an avalanche of problems and racial injustice that’s left U.S. cities far behind their peers around the world according to a host of quality of life metrics. If it were possible to go back in time and reverse these inner-city displacement projects, most city leaders would do so in a heartbeat.

But it’s a big leap from revisionist fantasy to actually changing things in the present day, and until recently, most people haven’t been there.

“In conversations with people in the community, it became clear that it’s hard to imagine a future without 94,” said Alex Burns, the Transportation Policy Coordinator for Our Streets Minneapolis.  “It’s hard to picture what a boulevard could look like.”

That’s the beauty of the new rendering released by Burns’ group, the launching point for a grassroots campaign by Our Streets to build support for a less impactful urban roadway option. The effort has been triggered by the Minnesota Department of Transportation, which spent years building up momentum for its “Rethinking 94” campaign. (For example, the TPT documentary is over five years old by now.)

For the agency, the outreach work attempts to get in front of critical conversations on what to do when the current freeway reaches the end of its expected design life. Built in the mid-1960s, like many older parts of the Twin Cities, much of the bridge and roadway infrastructure is due for expensive replacement any year.

But unlike MnDOT’s “Rethinking 94” effort, which largely maintains the status quo, the new Twin Cities Boulevard campaign is taking the slogan quote literally: what if we “rethought” the entire existence of the freeway?

An astounding amount of space

Gazing longingly at the boulevard rendering, my first reaction is to be amazed at the existing space on the interstate footprint. “Where are all the cars?” you might be wondering. Well, they’re behind the row of trees in the background: there lie four lanes of single-occupancy vehicle traffic (two in each direction) along with dedicated transit right-of-way running in the center.

Yes, there’s that much room. At the spot depicted, in the middle of Minneapolis’ Seward neighborhood, the freeway boasts 295 feet of right-of-way. That’s 30 percent wider than Paris’ Champs Elysées and four times the width of Chicago’s famous Michigan Avenue. If 94 was turned into a regular surface street, there would be an astounding amount of space for all kinds of other land uses, everything from parking to bocce courts to apartment buildings to bike paths, all while leaving space for a certain amount of traffic to flow.

“The rendering is really, more than anything, intended to capture people’s imagination,” Burns said. “It is to get them thinking about what would they like to see with this reclaimed space.”

If the rendering is any guide, there’s a ton of potential in shifting traffic patterns through the central Twin Cities, and allowing the communities near the freeway to reclaim some of the stolen land.

But what about the cars?

As for the cars? On the new campaign website, there are plenty of other freeways that don’t go through the densest parts of Minneapolis and St. Paul. And because most of the people who use I-94 today are local, moving within the core parts of the metro, the new boulevard might be just as useful for those shorter trips. Once you get rid of the through traffic, a lot of space opens up. 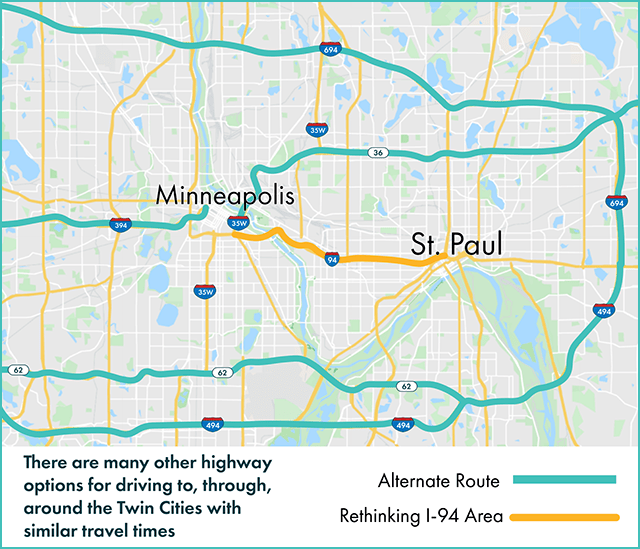 These days, I-94 carries something like 120,000 cars a day, though it was far higher before the COVID pandemic. If it were replaced with a surface boulevard, that number would have to be cut by at least half, with a lot of the through traffic routed along neighboring highways like I-694.

Believe it or not, from a traffic perspective it’s possible the change could work out. Plenty of other cities manage to handle commuting loads without limited-access freeways. The most notable regional examples are Madison, Wisconsin and Winnipeg, Manitoba; both metros manage to move cars using surface-level boulevards, with stoplights, and without the tremendous social and fiscal costs of high-speed grade-separated traffic.

That’s probably the reason why freeway removal has become an increasing trend, even in the car-saturated United States. The most famous American case is probably San Francisco, where the massive 1989 earthquake prompted a transformation of the elevated Embarcadero Freeway into a surface boulevard. But the idea is moving forward in other cities too: Syracuse, New York is removing a mile-and-a-half of Interstate 81, while activists in Seattle have just begun calling for the removal of a mile of Highway 99 in the South Park neighborhood.

(Globally, there is a longer list of success stories, like the Cheonggye Freeway in Seoul, South Korea or, most recently, the Pompidou Expressway in Paris, France.)

Surprisingly, in every case, removing the urban freeways actually made nearby traffic congestion better, not worse. That’s the hope, too, for what could happen in the central areas of Minneapolis and St. Paul.

Engagement along the most-impacted communities

The Twin Cities Boulevard campaign is aimed at building support for a different kind of roadway through Minneapolis and St. Paul. Back in the 1960s, the freeway was routed through what were the then the densest, most diverse neighborhoods, displacing tens of thousands of people and erasing wide swaths of working-class Minneapolis from the map. Since then, the communities along the route, places like Stevens Square, Phillips, Seward, and Elliot Park have been living with the constant stream of pollution, noise and dangerous drivers pouring on and off the freeway ramps.

“We’re building up this vision,” explained José A. Zayas Cabán, Our Streets’ advocacy director.  “We’re doing more community engagement and continue to show folks what it could look like and also have a conversation about different sections of the boulevard.”

For Zayas Cabán, a big part of that work is focusing on the “Housing and Community Benchmarks,” intended to ensure that improvements along a new roadway don’t displace the people who have long been living there. To this day, those neighborhoods that were most impacted by I-94 construction remain the city’s poorest, with life expectancy that’s often a decade shorter than areas in wealthier parts of the same city.

“We want to step forward as an organization to make sure we are advocating for transformation,” Zayas Cabán said. “We think about reconstructions that also account for the possibility of displacement and gentrification when land gets re-used.”

The list of proposed anti-displacement policies include land trusts, community benefits agreements, small business funds, and other ideas. But all of that is farther down the boulevard.

Since the famous Burnham Plan for Chicago in 1909, the power of a rendering to inspire change has been clear. In that case, the first comprehensive city plan ever made, the drawings by Jules Guérin captivated people in Chicago to re-think their industrial riverfront as a place that could be a park for people to connect with each other and with Lake Michigan. A few decades later, that’s exactly what happened and today the Chicago waterfront is a civic jewel.

Here, the image could be just as transformational, allowing people in Minneapolis and St. Paul to envision undoing the immense damage wrought by the 1960s bulldozers. Or not: even with a rendering, it might remain a hard sail to shift the tide of central city traffic.

“We know there are gonna be a range of reactions,” admitted Jose A. Zayas Cabán. “Everything we’re doing is living and breathing, and continues to take a step forward as we do engagement.”

Imagining the Twin Cities without I-94