Last week, after the Special Redistricting Panel released its plans for redrawing political lines in Minnesota, we published a series of maps showing how each of the eight congressional districts in Minnesota changed as a result of redistricting. That prompted some readers to ask: could we do the same thing for Minnesota’s state House and state Senate districts?

Turns out, that’s not so easy. Minnesota’s congressional districts keep consistent numbering from decade to decade (at least recently), so the First Congressional District from 2012 is essentially in the same area as the First Congressional District in 2022, with some adjustments to the boundaries to account for population size changes. But with legislative districts, the changes to boundaries are often more substantial and so the numbers aren’t kept consistent from decade to decade. That means it’s meaningless to compare, for example, Senate District 37 from 2012, which covered the city of Blaine, to Senate District 37 from 2022, which covers parts of Maple Grove, Medina and Independence. The two share no areas in common.

To help make sense of the changes — and to help you understand the news from the next few weeks as incumbent legislators retire or announce campaigns in entirely new districts — we built the tool below. Select a 2012 district from the menu and the district will be displayed on the map shaded in purple. The map will also show all the new, 2022 districts that contain part of the area of the old, 2012 district you selected, outlined in different colors.

So, for example, by selecting Senate District 1 you can see that the old SD1 (in purple) is fully enclosed in the new SD1 (green outline) — essentially, that district remained the same but grew southwards. 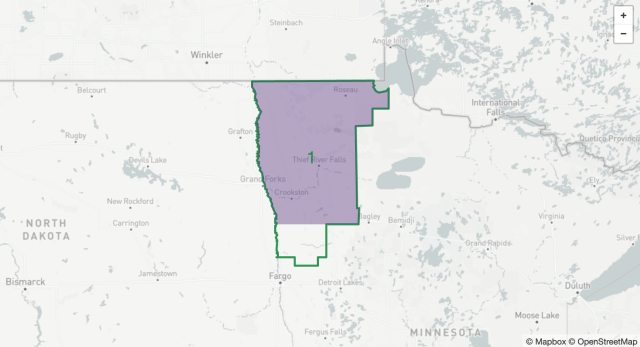 On the other hand, if you select Senate District 5, you’ll see this former central north-central Minnesota district (again, in purple) has been divided up among several new districts: Senate Districts 2, 3, 5, 6 and 7. 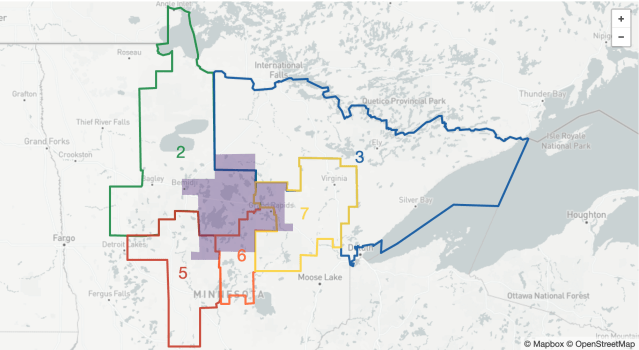 Use the tool below to explore the changes to Minnesota Senate and House districts of your choosing:

How every Minnesota legislative district changed in redistricting