It used to be that taking a walk in the spring or summer in western Minnesota meant seeing — or more often, hearing — a western meadowlark, a medium-sized bird with a cheery, lilting song that’s synonymous with the open spaces in the American West.

That’s less the case than it used to be. Last month, a report published in Science put a number on the declining size of the United States’ bird population.

It was big: down nearly 3 billion birds, or roughly a third of the birds present in the 1970s. The report, by researchers at the Cornell Laboratory of Ornithology and several partnering organizations, affirmed something people who study birds have noticed at local and regional levels for decades.

Among the habitats most affected? Grasslands and boreal forests, habitat types that together cover more than half of Minnesota.

The report analyzed population changes for more than 500 bird species in the U.S. and Canada, using both locally gathered population data covering decades and weather radar to estimate the mass of birds migrating overnight during the spring between 2007 and 2017.

“The question was are there really fewer birds than there were in 1970, or are we seeing a shift?” said Kenneth Rosenberg, the lead author of the study, who is a conservation scientist at Cornell and the American Bird Conservancy. In other words, were rare and threatened birds being replaced by birds better adapted to human landscapes? Or were there actually fewer birds?

“We were kind of shocked that when you put that all together, taking into account the increasing or decreasing species, there was this net loss,” Rosenberg said.

Altogether, the researchers found 57 percent of species in the study group had population declines since the 1970s, including 74 percent of grassland species and 50 percent of boreal species.

“Part of the reason why this study has made people really stop and (think) about the impacts we’ve had on our natural system is because of the fact we can quantify it as something that people can take more seriously. Simply saying ‘It seems like there are less birds’ is not as powerful as saying ‘Listen, there are three billion less birds,’” said Sushma Reddy, the Breckenridge chair of ornithology at the Bell Museum.

Birds that breed in grasslands, like those that stretch from Minnesota all the way down the Great Plains, are seeing the greatest share of their 1970 bird population decline of any U.S. or Canadian biome, the study found, at an estimated 53 percent.

“Anecdotally, anyone who lived in farmland in western Minnesota (saw) meadowlarks all the time. Those are declining, and they seem to be declining pretty steeply,” said Bob Dunlap, a zoologist and data specialist with the Minnesota Department of Natural Resources.

Decline in birds by biome since 1970
Note: Margins of error shown at the 95 percent confidence interval.
Source: Decline of the North American avifauna, Science, Sept. 2019

The new study only quantified the decrease in birds, and didn’t link cause and effect, but bird researchers have their theories. 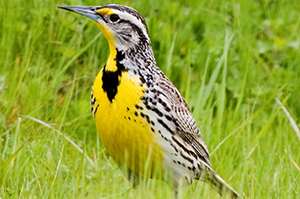 The western meadowlark is common in western Minnesota’s grasslands during the spring and summer. The medium-sized, yellow-breasted bird nests on the ground and migrates to the arid Southwest in the winter. It’s cheery chirp should sound familiar to anyone who’s taken a walk in the prairie. The western meadowlark’s population is estimated to have declined by 40 percent since 1970, according to the bird decline study.

One big driver seems to be habitat. With increasing urbanization and agriculturalization of land, there’s simply more human-altered spaces, and fewer places for birds to live in their natural ecosystems.

But it’s not just through habitat alteration that humans are harming birds in the grasslands.

A study that came out shortly before the bird declined study linked neonicotinoids, common pesticides that treat plants while they are seeds, to bird weight loss. Birds that fed on levels of the pesticides present in seeds saw suppressed appetites, which could delay their ability to bulk up and migrate.

“That can be life or death if you’re missing migration by a few days,” Dunlap said.

Changing landscapes mean more fatal collisions with buildings and pets for birds, too.

Big cities along major flyways, like Chicago, St. Louis and Minneapolis, mean lots of buildings to run into, while the growing number of people and homes overall means more residential window run-ins that can be fatal to birds and more exposure to cats, said Luis Ramirez, Audubon Minnesota’s director of conservation for the upper Mississippi flyway.

Birds that live in boreal forests, such as the pine, spruce, fir, aspen and tamarack woods of Minnesota’s Arrowhead region and up into Canada, are seeing big losses, too.

The evening grosbeak, a yellow-colored bird often seen in the Boundary Waters Canoe Area Wilderness has seen the biggest decline since 1970 by percent of any bird population in the study, at an estimated 90 percent. 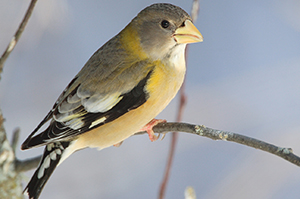 The boreal evening grosbeak can be found in northeastern Minnesota for part of the year, before migrating south for the winter. Nationally, they declined as a percent of their 1970 population faster than any other bird species, at 90 percent, according to the bird decline study. That could partly represent a return to their numbers before a population increase, but could also be due to climate change and habitat loss, according to Minnesota Conservation Volunteer.

Habitat pressures on boreal birds are similar to those in grasslands, Ramirez said. It’s not just industrial use like timber that’s changing the forests, but human encroachment, with cabins and recreational activity.

Boreal forests are also shifting in character as a result of climate change, with more maples and other species that were previously unable to survive the harsh winters. Some scientists predict warming temperatures could make Minnesota’s climate more like Kansas, all but eliminating boreal forests from the state.

“Climate change is definitely exacerbating most of these habitat loss factors, and certainly will in the future. We don’t think that climate change has been the major driver of bird declines …. (it’s) an immediate threat, but habitat loss is happening right now and has been happening,” Rosenberg said.

Not every species in decline is in serious trouble. Dunlap noted the decline of some species, such as red-winged blackbirds, common grackles and house sparrows, is not necessarily a huge deal because it’s possible those birds had been overabundant relative to historic populations.

Some critics have suggested the hubbub surrounding the findings in the study is overblown: Some of the declines in numbers represent invasive bird populations, like starlings and house sparrows.

Todd Arnold, a conservation biologist at the University of Minnesota, told Slate that if you take out the top 40 species in decline, “What’s left behind is hundreds of birds, some of which are declining, some of which are increasing.”

While many of the birds decreasing at high rates should prompt concern, “that’s not apocalyptic. It’s saying that, you know, between 5 and 10 percent of our avifauna is in serious trouble. That’s a serious message. It’s maybe not quite ‘Decline of the North American Avifauna,’” he said, a reference to the study’s title.

While the research found big net losses in some birds’ numbers, other species have been conservation success stories.

Bald eagles, all-but-decimated by the agricultural pesticide DDT, represent another success story: after they were listed as an endangered species, their numbers rose from an estimated fewer than 500 nesting pairs in the 1960s to more than 10,000 today. 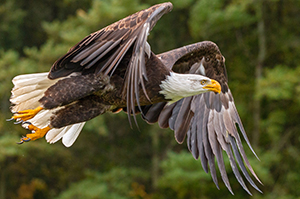 Bald eagles are a conservation success story and are no longer a rare site in Minnesota. This bird of prey, the emblem of the United States, was nearly decimated by DDT, a pesticide. Conservation efforts have helped increase their populations by more than 1,000% since 1970, according to the bird decline study. That number had a large margin of error, but the bald eagle's population increase is corroborated in other research.

So, too, with many species that make their homes near water.

“With waterfowl, it’s a very different story. It was the duck hunters who noticed the decline in duck populations in the early part of the 20th century. They did something about it,” Rosenberg said. “The result was literal billions of dollars put into wetland restoration and protection and management of duck and goose populations for the purpose of having healthy populations for hunting.”

Mallard populations, for example, have increased by 30 percent since the 1970s, according to the study.

“We are trying to use the waterfowl example as a model. How can we do that with other habitats, other groups of birds, in particular. Nobody hunts sparrows,” Rosenberg said.

Both individually and collectively, there’s lots of things that can be done to help birds, scientists say.

The American Bird Conservancy, which partnered on the research, lists seven simple things people can do to help: putting stickers on windows so birds don’t fly into them, supervising cats or keeping them indoors, planting native species, avoiding pesticides like neonicotinoids, drinking shade-grown coffee, which is grown in a manner that preserves habitats for birds in coffee-growing regions, reducing single-use plastic consumption and contributing to citizen-science efforts that make birds some of the most well-researched animals on the planet.

“There’s something for everyone, whether you’re 5 or 85. Whether you have no money or a lot of money, there’s something everyone can do to help birds,” said Jordan Rutter, director of public relations at the American Bird Conservancy.

Why Minnesota is particularly hard hit by bird declines