Welcome to Public Numbers, wherein a variety of MinnPost.com journalists will write Current Posts about numbers and public life — what we can learn from these numbers, and how to know when numbers are being misused. Joel Kramer, MinnPost.com editor and CEO, is writing today’s entry, and you can look for him to write more.  But others will join in when the numbers move them, and we hope our readers will contribute to the conversation, too.

Where the jobs are, and aren’t

Mike Meyers’ excellent piece in Monday’s Star Tribune about Minnesota’s dismal job growth is a vivid reminder of why we need journalists telling us what the government’s numbers mean, rather than relying just on the government’s own communications.

When the state Department of Employment and Economic Development released its last employment numbersin mid-October, which showed the state actually losing 6,300 jobs in September, here’s what DEED commisioner Dan McElroy had to say in the department’s press release:

“Because monthly numbers fluctuate, job creation and employment trends are best viewed over a longer timeframe. For example, Minnesota employers have added 9,800 jobs in the last year and 100,683 jobs over the last four years.”

McElroy’s assertion was technically accurate but misleading, because he did not compare the results to employment growth nationwide.  So, with the help of fiscal guru Jeff Van Wychen, I prepared this chart last week for publication in MinnPost today. 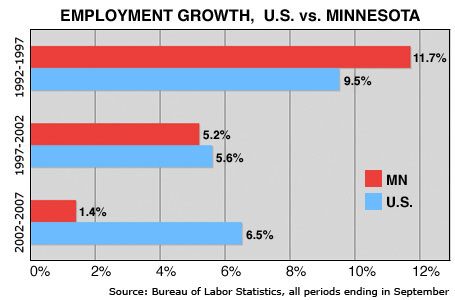 How much do these numbers matter?  If Minnesota had increased employment over the past five years at the national rate, we would have 140,000 more jobs than we now have.

Meyers beat me to the punch Monday morning with a similar analysis.  What’s interesting is that he asked the department to reanalyze the numbers for him, and they did — producing a kind of truth the state agency had not revealed before.

Why Minnesota is doing relatively poorly is a complex question. But one observation by Federal Reserve economist Toby Madden is worth noting.  Madden points out in Meyers’ story that population growth is a factor in job growth, and in the 1990s the state’s population growth was only 6 percent below the nation’s while more recently it’s 30 to 50 percent lower.

Of course, jobs can create population growth just as much as population growth can create jobs.  But this brings up a larger point — employment growth is not necessarily the best measure of the health of an economy. New jobs that pay poorly and don’t offer benefits, for example, can actually lower the average prosperity of the people who were in the state before those jobs arrived.

In 2006, Minnesota ranked 46th among the states in per capita income growth, and we were below average in 2005 as well. As a result, we’ve dropped out of the top 10 most prosperous states. Since this is a per capita number, our population growth relative to the nation is not an explanation for this deteriorating performance.  If you think you can shed light on what does explain it, let me know.