It was the 15th time voters chose Peterson to represent the district.

The 7th is Minnesota’s largest district, covering more than a third of the state’s total area, and knits together a column of mostly rural, largely farming communities across the state’s western side, from its chimney almost all the way to Iowa. It covers regional centers like Moorhead, Fergus Falls, Alexandria and Morris.

It’s also one of the state’s most conservative places. Of any Democrat in Congress, Peterson represents the district that went for President Donald Trump by the largest margin. The Seventh is represented almost exclusively by Republicans in the Minnesota Legislature.

Most places like CD7 have been electing Republicans to Congress for years. So why is Peterson, a Democrat, still there?

Of agriculture and incumbency

As Tim Lindberg, an assistant professor of political science at the University of Minnesota-Morris, sees it, it’s not one factor, but a mix of them that helps explain how Peterson’s been able to keep his seat in a reddening CD7.

A big one is farming, he said. CD7 is primarily rural. There’s no big urban center: Moorhead, at about 43,000 people, is by far its biggest city.

Peterson is the ranking member of the House Agriculture Committee. As such, he has a lot of power when it comes to ag policy, including the farm bill, the omnibus bill that dictates everything from federal agricultural subsidies to crop insurance.

“He has been a really big supporter and clear with his support (of) ag policy and the farmers throughout his entire tenure,” Lindberg said.

He sees agricultral policy as the biggest driver of Peterson’s success, but it’s not the only area in which Peterson’s legislative agenda has tended to fit his district’s.

Peterson is among the most conservative Democrat in Congress, voting against his party 27 percent of the time, according to an analysis by ProPublica. He’s sided with Republicans on gun  rights and in 2010, voted against the Affordable Care Act (though more recently, he opposed its repeal).

On average, CD7’s voters are also moderate, Lindberg says. “Because of his very moderate stances on a lot of things, he fits with the mean voter in the district,” he said. “He’s more of an old-school moderate Democrat who will cross party lines to vote for things.”

As someone who votes in a more centrist fashion, Peterson has historically played well with independents, but also people who lean Republican but are willing to cross party lines, Lindberg said.

That voters know all this about him has a lot to do with incumbency. Between voters’ familiarity with a politician’s name and his or her record, political scientists estimate incumbency adds a 3 percent to 10 percent advantage at the polls, Lindberg said.

For the last three elections, Peterson’s margin of victory has been between 4 and 9 percentage points.

“It’s mostly, I think, at this point, hanging onto that strength he’s always had (in ag policy and more generally as a moderate) and then banking on his incumbency advantage,” Lindberg said.

But CD7 isn’t the same district as the one Peterson was first elected to in 1990. This year, the Cook Political Report has it tied with its neighbor, central Minnesota’s CD6, for most conservative Congressional District in the state. Both are R+12, which means, on average, they were was 12 percentage points to the right of the country in the last two presidential elections. CD6 is considered a safe Republican seat for Rep. Tom Emmer, who easily won re-election last week.

Despite the district’s Republican-friendly reputation, some were surprised when, in late October, RealClearPolitics moved Peterson’s race against Republican Dave Hughes from “leans Democratic” to “toss-up.”

That might reflect a trend in the district. Peterson’s margins have eroded since 2012, when the current Congressional District lines were first in use. In 2012, he beat Lee Byberg by 26 percentage points. This year, he beat Hughes, a second-time challenger, by 4.3 percentage points, compared to 5.1 percentage points in 2016.

This year, Peterson carried 25 of the 38 counties that party or wholly make up CD7, with stronger margins in further western and northern parts of the district. Maps of Peterson’s vote margin versus his Republican opponents from 2012-2016 by voting precinct show where the DFLer’s support has eroded: 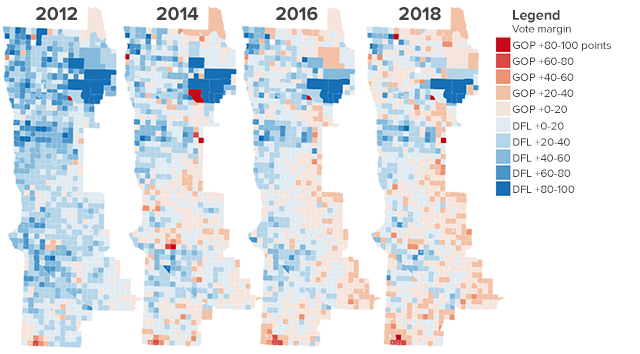 For much of Minnesota’s history, the northwest corner was one of the strongest DFL areas in the state, apart from the Iron Range, Lindberg said. This is also a part of the state reliant on sugar beet farming, an industry Peterson has championed. As time’s passed, Peterson’s hung onto support there better than he’s held the support of the central parts of his district: places in lake country, like Douglas and Otter Tail counties, where there are many transplants and retirees from other parts of the state. The southwest part of the district, Lindberg said, has been conservative for longer than other parts of the district. Farm country was once part of the backbone of the Democratic Farmer-Labor Party, and that’s largely changed as Minnesota has become more polarized along urban-rural lines.

The district’s voting history shows some of Peterson’s constituents have been voting Republican — for president and for state legislature, but have kept on voting for Peterson. As more voters in CD7 align themselves with Republican policies, that could change.

At other levels of government, that change has already happened.

In 2006, nine out of 17 districts Minnesota House districts that are fully or almost fully within CD7 were won by Democrats. In 2018, only the two districts around Moorhead were won by DFLers.

Sen. Amy Klobuchar, the state’s most popular Democrat, at least in terms of votes, won every Congressional distict, but won the 7th by a tiny margin: just 0.12 points, on par with CD6, which she won by 0.10 points. DFLer Sen. Tina Smith lost CD7 by about 15 percentage points.

Peterson’s district — while it exists

For Peterson, it’s likely that he’s a known quantity, district-wide, that’s helped him stay in against strong headwinds.

“His race this time was somewhat close and was close last time despite not facing a top-tier challenger. This should be a relatively easy Republican pickup whenever he retires,” Kondik wrote.

Many are confident Peterson, who is 74, will hold the district as long as he runs for it.

But there’s a good chance Minnesota could lose the seat altogether.

By some estimates, Minnesota is expected to lose one of its Congressional districts in 2021 redistricting, since its population isn’t growing as fast as other states’. It’s unclear what, exactly, the new map would look like, but the erasure of one district could force one Congressperson to run against another if both wanted to keep their jobs.

“They keep going after it thinking they’ll be able to beat Peterson, but he’s just so beloved, they’re not going to beat him,” he said at a press conference last week. “But the minute he steps down that is going to be a very difficult seat for the Democrats to hold. I’m just being very honest with you. It will be very difficult to hold.”

Peter Callaghan contributed to this report.