Creative Commons/Tony Webster
The MPD’s current numbers mean the city has one of the lowest residency rates in the country.

If you’re a Minneapolis cop, chances are you drive to and from work every day on highways that connect the city to the suburbs or the exurbs — or even western Wisconsin. Chances are that when you leave behind your job each day, you leave behind the city, and everything in it, too.

That’s because only six percent of current sworn Minneapolis Police Department officers live in the City of Minneapolis, according to data obtained from the MPD. In raw numbers, that means just 48 of the of the city’s 807 full-time sworn officers call the city home.

In the wake of the unrest in Ferguson, Missouri — not to mention the MPD’s own history of tension with communities of color — those figures raise obvious questions about how well the department reflects and understands an increasingly diverse city. But it also raises an even more fundamental question: does residency even matter when it comes to how well police officers do their jobs?

Residency rates have become a hot topic in recent months, due largely to the crisis in Ferguson, putting a spotlight on the demographic and racial make-up of departments nationwide. The officer who shot teenager Michael Brown, Darren Wilson, lived in an overwhelmingly white town, but served a community, Ferguson, that is 67 percent black.

Percentage of sworn officers who live within the city limits:

The MPD’s current numbers mean the city has one of the lowest residency rates in the country. Among the nation’s 75 largest police forces, in fact, the average residency rate is around 40 percent, according to FiveThirtyEight, which compiled the data from the Census Bureau’s American Community Survey.

The city’s numbers don’t just stand out when compared to other big cities around the nation, though. St. Paul has the same requirements for new hires as Minneapolis, with a similar cost of living but a lower starting salary ($54,504 for the MPD vs. $49,807 for officers in St. Paul).

While residency rates vary across the country, in almost all cases they are closely linked to the diversity of the police force. Data nationwide shows that black and Hispanic officers are considerably more likely to reside in the cities they serve than white officers.

And though the department’s diversity is improving, officials acknowledge it still isn’t where the department would like it to be. “Give it time,” says David Burbank, a supervisor in the department’s recruitment and training unit. “We’re getting better.”

In the aftermath of Brown’s death — and a grand jury’s decision not to indict Wilson for the shooting — questions about how race, residency and cultural geography affect policing have been under scrutiny like never before.

Yet studies show that neither race of the officer nor residency actually plays a significant role in the rate of police misconduct or complaints, says Terrence Allen, a professor of social work at the University of Texas who studies police and urban-community relations.

Sam Walker, an expert on police accountability and public oversight, echoes Allen. “I do not believe that where officers live is a significant factor in actual police conduct,” Walker says. “There is a [public] perception problem, of course. But all of my research shows that what makes a difference is how professional the department is and how accountable they hold individual officers.”

While residency itself might not play a significant role in police misconduct, questions remain about how it affects a department’s overall perception of a city  — and the people they police— if almost all of its officers live outside it.

“If police officers come in with a negative perception of the people they are protecting and serving, it is going to diminish their interest in helping people,” Allen says. “These issues are driven by attitude of the persons who patrol these communities. This problem goes all they way back more than 100 years. It’s part of the fabric of this country.”

The effect of those implicit attitudes would seem to be an important question in Minneapolis. In October, the American Civil Liberties Union of Minnesota released a report revealing that black residents of Minneapolis were significantly more likely to be arrested than whites for low-level crimes such as loitering, curfew, vagrancy, and marijuana possession. In addition, blacks in Minneapolis were nearly nine times more likely than whites to be arrested for disorderly conduct.

In the 1990s, the Minneapolis Police Department had a residency requirement for new hires. But in 1999, Hennepin County Sheriff Rich Stanek, then a Republican Representative and a lieutenant in the MPD, introduced a bill called the “Stanek Residency Freedom Bill” that prohibited municipalities in Minnesota from requiring residency for employment. Then-governor Jesse Ventura signed it into law.

Bill Green, a history professor at Augsburg who served on a task force creating the city’s Civilian Review — a citizen oversight board of the police department — says a residency requirement was never a solution for creating a more accountable police department. “When that was in place, police tended to live in neighborhoods that were predominately white, middle class, politically conservative,” he says. “And so the streets which they patrolled were not necessarily like the streets where the lived.”

Green says he doesn’t believe that residency is really substantive to the question of how we get better cops. “My sense is that cops learn how to develop that siege mentality from the culture they enter into,” he says. “For them it’s an issues of life and death…you learn to be aggressive in order to get home at night. The culture they enter into is an important factor in how they treat people in the community.”

Changing that culture has been a priority for Chief Janeé Harteau, who took over the department two years ago under the pledge of creating an “MPD 2.0,” a revamped department dedicated to community engagement, transparency and accountability.

Patterson lives in Minneapolis and says he sees the direct impact of the new “2.0” department every day. “So much is perception, and the community is seeing we are tearing down those barriers,” he says. “But it takes time.” 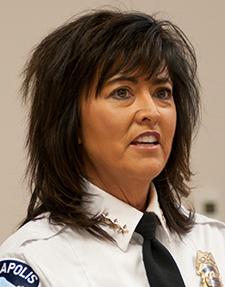 Last year, Harteau requested an assessment of the department from the U.S. Department of Justice. In February 2014, the Office of Justice Programs’ Diagnostic Center team came to Minneapolis to meet with 23 community members to discuss their perceptions of the MPD and the citizen complaint process.

Public perception, it holds, also wants the department to be more of a representative of the city as a whole. “Community members reported there are a few officers that treat them with disrespect and without dignity,” a representative of the Office of Justice Programs noted in an email. “They believed these officers lacked cultural sensitivity and the language barrier made interactions difficult. Some mentioned officers could use training to improve their communication skills.”

So far, the Diagnostic Center has recommended the MPD build upon its current efforts expand community engagement efforts. Additionally, the Office of Justice Programs says, the MPD is in the process of training all officers in Fair and Impartial Policing, a system of training designed to reduce “implicit bias” in police departments.

Increasing community engagement and hiring a diverse group of officers that mirror the community are just the first steps to creating a more transparent and accountable department, Allen says.

“If we can eliminate race from the equation, we can get at these deeper issues of policing,” he says. “We can start looking at issues like, ‘Should we train officers more? Should we transition rookies from training differently? Are bias and attitudes an issue?’ Once we eliminate the racial disparities, we can start focusing on how we can create better police departments.”

MPD spokesperson John Elder says no decisions will be made about the department’s next steps and new training initiatives until the DOJ report is complete, which should be within the next few weeks.

But he says the department is already increasing its efforts to connect to the community. “I will tell you that we are seeing our officers are spending more time than ever at community meetings with the boots on the ground, cops out of cars,” he says. “And that is more important than where I put my head on a pillow at night.”