The project director for the planned extension of the Blue Line light rail, from Target Field to Brooklyn Park, had a not-so-subtle message for the members of a Metropolitan Council committee Monday: The $1 billion price tag is certain to go up.

During a bus tour of the proposed route — which doubled as a meeting of the council’s transportation committee — Dan Soler repeatedly pointed out all the ways that the current estimate will grow. That amount was placed on the project last summer when the engineering was at the 1 percent level, and is certain to look different when the staff presents an updated figure at the end of the year. That’s when engineering for the project will be at 15 percent.

And the estimate might be different again when the engineering reaches 30 percent next summer.

“The main message that we’d like to get across … is we are at a very early stage, that the dollar amount that’s been set for the estimated cost of the project is based on a very preliminary identification of risks and scope items, and as we continue to develop this we’ll continue to update those,” Soler told council members before they boarded the bus. Soler said he would use the tour to identify “this is stuff that’s in the current scope and here’s some of the stuff that’s not.”

Cost will depend on a familiar set of questions

And while Met Council staff has been talking to BNSF about buying half of the company’s 100-foot-wide right of way between Golden Valley and Brooklyn Park, it is far from having a dollar amount set. That is critical because eight miles of the 13-mile alignment will share the rail right-of-way. Securing the deal will necessitate shifting the freight tracks to one side and making other improvements that the railroad will demand.

The Blue Line Extension will also face the costs of unknowns that are now familiar to those following the budget travails of the Southwest LRT project: the potential for poor soil conditions, environmental contamination, wetlands and floodplain, park impacts. One example of that was apparent during the tour when the bus stopped on the Olson Highway bridge as it passed over the tracks. Just east of the right-of-way are wetlands that will likely require bridges on pilings to support tracks.

If there is good news, it is that the current estimate has a 34 percent contingency — the share of the $1 billion not yet devoted to specific project costs. The closer the project gets to construction and the more detail designers and engineers have in hand, the less the federal government requires be held in reserve as contingency. 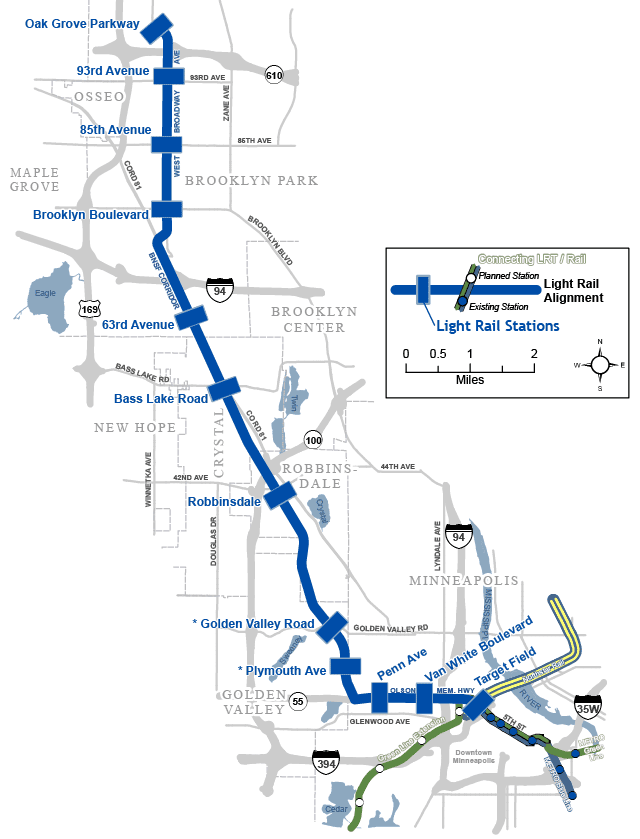 The Blue Line Extension, also known as Bottineau, would be the fourth major light rail line in the region (though, because of delays in the Southwest LRT project, it is only a year behind the Green Line extension.) It will travel from the Target Field station to Brooklyn Park via Minneapolis, Golden Valley, Robbinsdale and Crystal. Construction is set for between 2018 and 2020 with passenger operations set to begin in 2021. Ridership estimates by 2030 is 27,000 per weekday.

The route contains three distinct segments. After it leaves Target Field, it moves down the median of Olson Memorial Highway. At the border of Minneapolis and Golden Valley, just west of Wirth Lake, the tracks will swing down to the BNSF freight rail corridor. The line then leaves the corridor at 73rd Avenue North and swings east, where it will share West Broadway until passing over HW 610 on a new rail bridge before terminating near the Target’s North Campus.

Funding is similar to the plan for Southwest LRT, with one small but significant exception. With Southwest, the federal government will be asked for 50 percent of the cost, with the Counties Transportation Improvement Board (CTIB) paying 30 percent and the Hennepin County Regional Rail Authority and the state paying 10 percent each. In the Blue Line Extension, the feds will be asked for 49 percent with the CTIB paying 31 percent. That 1 percent shift is the result of recent changes in federal funding policies that give priority to projects that have a majority of funding from nonfederal sources.

Bottineau will have one funding issue in common with Southwest LRT, however. The state share — $166 million with Southwest and currently $100 million with Bottineau — is uncertain at best. Majority House Republicans have stated they don’t favor additional light rail construction and have not yet offered any money for the Green Line extension.

Transit advocates have been pushing Gov. Mark Dayton’s proposal to add to the quarter-cent  five-county sales tax now administered by CTIB. The additional half cent would shift the state’s 10 percent share of the projects to the region. That plan also was not accepted by the House GOP.

The ongoing political, environmental and funding issues facing the Southwest LRT project were on the minds of some of the council members Monday. While passing through a leafy, suburban street that abuts the rail corridor, Council Member Jennifer Munt of Minnetonka asked Soler, “Is this another Kenilworth? Where people will sue?” That refers to the federal litigation filed by residents who don’t want the existing rail corridor through the Kenilworth Corridor near their homes to be used for both freight trains and light rail.

“I’m not getting that vibe right now,” Soler said.

Another budget risk is any political decisions to change how the light rail line transitions from the freight tracks to the surface streets near 73rd Avenue in Brooklyn Park. Currently the plan is for tracks to pass through a complex intersection at grade, with signals controlling car traffic and light rail. But Soler said Met Council leadership thinks the conflicts might be too much, and are suggesting a bridge over Bottineau Boulevard on its way to West Broadway.

The alignment has been adjusted here to avoid having to purchase houses that line the street. “We’re not going to buy any homes, but we’re going to get close to some,” Soler said.

Why use W. Broadway at all when the BNSF tracks continue north? Soler said planners and politicians want the light rail to pass near Hennepin Community College, a new county library and end nearer the Target Campus, which he said has vast vacant land with development potential. The company owns much of the land around the terminus, and has discussed expanding its campus, providing space for other companies, building housing and some retail, Soler said.

Soler was the director of construction on the Central Corridor project, the current Green Line between downtown Minneapolis and St. Paul. His deputy project director, Mary Sue Abel, also worked on the Green Line. The project scope and budget will be updated in time for the beginning of the municipal consent process in December. The budget and scope will be updated again next summer to allow the project apply to the FTA for permission  to move into the engineering phase.