By the end of September, Minneapolis officials want to clear the large homeless encampment just north of East Phillips Park at Hiawatha and Cedar Avenues and start the process of connecting the residents there with housing and other services. But as the row of tents grows daily — becoming what is believed to be among the largest such sites ever in Minnesota — here are some of the biggest challenges officials will have to address to accomplish that:

The camp has become a landing spot

About three months ago, a homeless family pitched a tent on the narrow strip of land near the Little Earth housing complex. They found relief thanks to the area’s high visibility and sound wall; it seemed safer than sleeping in alleyways or near trails without much traffic or street lighting, and word of the location spread among other people sleeping outside.

Homeless people across the Twin Cities soon migrated to the Hiawatha encampment from all sorts of sleeping spots: Minnehaha Park, Lake Street alleys or trails near the Mississippi River, among others. For many reasons, sleeping outside in a group beats sleeping outside alone. Now a sprawl of more than 70 tents stretches along the west side of Hiawatha Avenue. It’s home to at least 120 people, including many children and several pets. Most of the people at the encampment are Native American and represent a variety of tribes.

The site’s status as a place of refuge grew after social-service workers set up portable toilets and washing stations, while volunteers ramped up their visits to pass out food and clean up trash around the tents.

For the Minneapolis Police Department’s homeless liaison, Sgt. Grant Snyder, the growth has given the settlement the feel of a small city. “And with that, it has brought city-sized problems,” he told City Council members at a committee meeting to discuss public safety last week. He pointed out issues ranging from violent crime to poor sanitation to young children at the camp being unequipped for school.

The camp is representative of a bigger problem

“When governments’ objectives historically have been to eliminate people by stealing culture, language, land, social infrastructure — this is the result,” said Robert Lilligren, head of the Native American Community Development Institute. The encampment represents some of the city’s biggest social problems: Too many people don’t have access to culturally appropriate or affordable housing, drug treatment centers or mental-health counseling, advocates said.

It also embodies a homelessness epidemic that goes beyond Minneapolis. Rents are rising as the metro area’s population grows and the pace at which it adds housing is moving too slowly. People are worried that encampments like Hiawatha will become more commonplace in the Twin Cities over time, as they are in cities with extreme housing unaffordability on the West Coast. “The emergency is not the camp. The emergency has been going on for years,” John Tribbett, of St. Stephens Humans Services, told City Council members. “The emergency is now visible.” 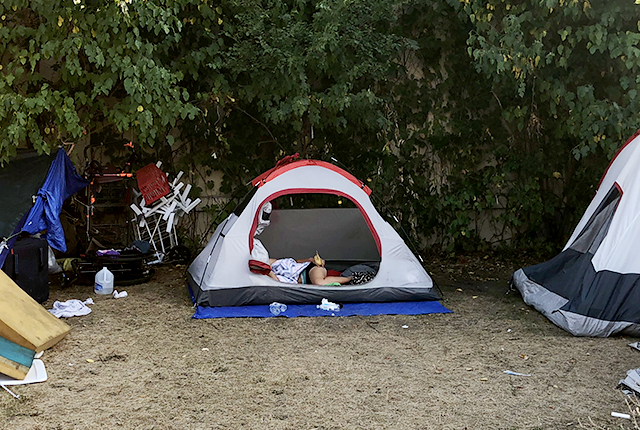 MinnPost photo by Jessica Lee
Homeless people across the Twin Cities migrated to the Hiawatha encampment from all sorts of sleeping spots.

Amid the scramble to house everyone, one underlying fact is key: Homelessness takes many forms. Some people are precariously housed, meaning they’re just one paycheck from homelessness. Others are couch-surfing or sleeping in vehicles. And then there are those who are “chronically homeless,” or dealing with long-term homelessness and often using emergency shelters or sleeping outside. People at the Hiawatha camp are among the latter.

And though a head count at the Hiawatha encampment is easy, tallying all of the region’s homeless people is not. Most chronically homeless people are constantly on the move, going from site to site with pushes from law-enforcement or park authorities. That makes it hard for nonprofits or government agencies to track them. Hennepin County initiates spot counts on random nights to try to get a sample of the region’s homeless population: The latest tally, in April, found that there were about 400 people without shelter, and a count roughly two weeks ago recorded more than 1,370 adults and children in emergency shelters. Most beds in the county’s shelter system fill up for the night by morning.

Standing in front of City Council members, one volunteer showed a picture of hundreds of used needles he and others picked up at the camp. And that was in just one cleaning spree.

Many people at the camp are addicted to heroin and methamphetamine. They’re shooting up in tents when law-enforcement officers are around, or out in the open when activity is quieter, residents have said. Dealers have pinpointed the site as a hotspot for business, and some residents fear for turf fights with the camp’s growing size. Meanwhile, volunteers with groups such as Natives Against Heroin are trying to keep people safe as possible by passing out kits with new needles and naloxone — a drug that can fight the effects of opioids and prevent overdosing. At least one person has overdosed so far, though no one has died, MPD’s Snyder said.

Beyond needles, the amount of human waste also creates a significant health risk, he said. 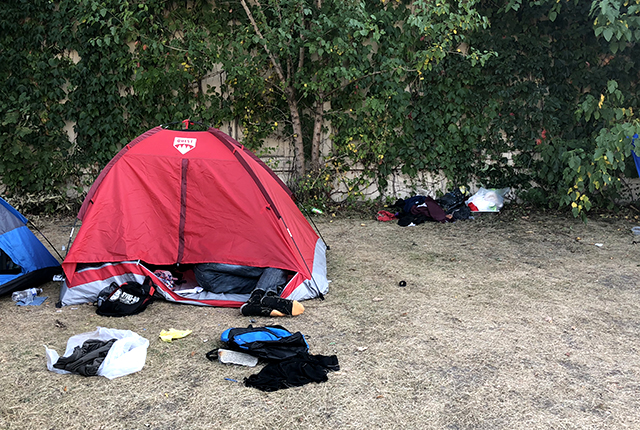 MinnPost photo by Jessica Lee
A sprawl of more than 70 tents stretches along the west side of Hiawatha Avenue.

Health officials have so far heard reports of a drug-resistant bacterial infection known as MRSA, or methicillin-resistant Staphylococcus aureus, as well as hepatitis C, scabies and sexually transmitted diseases among residents. Also, Gretchen Musicant, Minneapolis’ commissioner of health, has noted the site’s ripe potential for a hepatitis A outbreak — an infection that plagued homeless camps in California last year — if they don’t take necessary steps soon. Officials may launch a new effort to vaccinate as many homeless people as possible across the county to prevent hepatitis A, she said.

Snyder, who is spending most of his time at the camp, said the potential for violence is growing with the number of people joining the camp. Gunfire has erupted near the site at least once, though no one was injured. For now, residents are mostly handling disagreements among themselves, he said, but among the most alarming safety threats: groups “going from tent to tent looking for single women,” seemingly as part of a human trafficking operation, he said.

At least one resident, John Carlbom, expressed fear for the community’s safety with “gangs” and “pimps” hanging around, noting looming threats by predatory men against women. “It’s getting really bad now.” 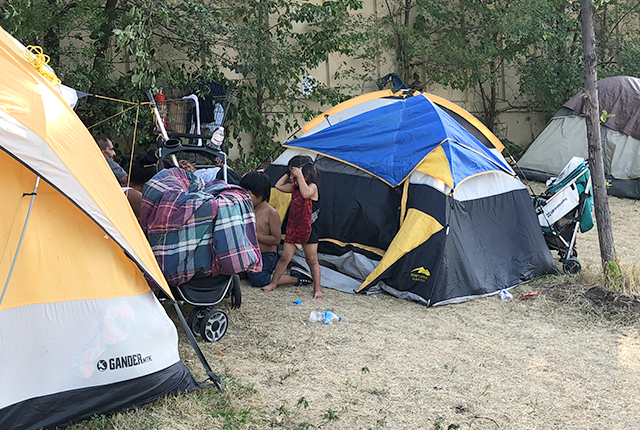 MinnPost photo by Jessica Lee
The Hiawatha homeless encampment is home to at least 120 people, including many children and several pets. Most of the people at the encampment are Native American and represent a variety of tribes.

At one point, Snyder pitched a tent to get a better sense of conditions and provide surveillance throughout the night. Many residents know him by name. The police department has also set up a couple of mobile video cameras and boosted its patrols in the area.

Several people who live at Hiawatha — an activist, a lifelong member of the neighborhood and a man who’s been at the site since its early days — want to make it known: Life at the camp is getting worse.

Gretchen Nickence, who’s advocated at the state Capitol on behalf of homeless people before, was sleeping with a group along a bike trail in Minneapolis recently when she said police officers told them to migrate to the Hiawatha camp. Addressing City Council members at the meeting last week, she called for better collaboration and use of the city’s new and existing housing to help homeless people. Every homeless person in Minneapolis is wondering: “Why isn’t there any help?” she said.

Meanwhile, Caryn Pacheco, who has always lived in the neighborhood and now sleeps at the camp, told council members that residents are exhausted by sharing their struggles with officials, again and again, when nothing seems to come of the conversations. It feels like the city is only talking about the camp, not with it, she continued. “You can’t keep us out of the loop. In the meantime, we will decide our own leadership and we will take care of things as we see them.”

Clearing the camp is just the beginning

Agencies and nonprofits from the city, county and state are part of the massive effort to connect the camp’s residents with shelter and other services before fall’s cold temperatures move in. Among their first steps: Make everyone in tents fill out surveys with their housing needs. That process is under way. A city spokesman didn’t respond to a request for a funding breakdown of Minneapolis’ response so far. 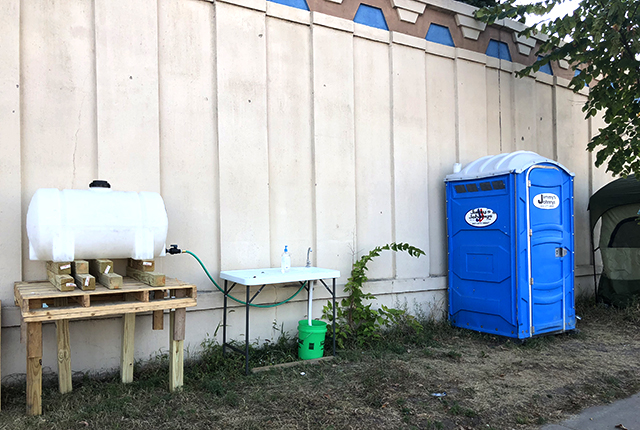 Meanwhile, the city is looking for long-term solutions to its growing homeless population and lack of accessible housing for low-income residents. Among officials’ steps so far: They want to make it easier for property owners to turn existing space into affordable housing and, in some cases, encourage landlords to eliminate certain criteria to rent, such as policies preventing people with criminal or eviction histories.

The council’s committee for housing issues will highlight those types of hurdles and talk about the Hiawatha encampment on Sept. 12. “Just finding a bed is not going to solve this issue,” city coordinator Nuria Rivera-Vandermyde said.

‘The emergency is now visible’: How the Hiawatha homeless encampment came to be. And what Minneapolis officials are trying to do about it.