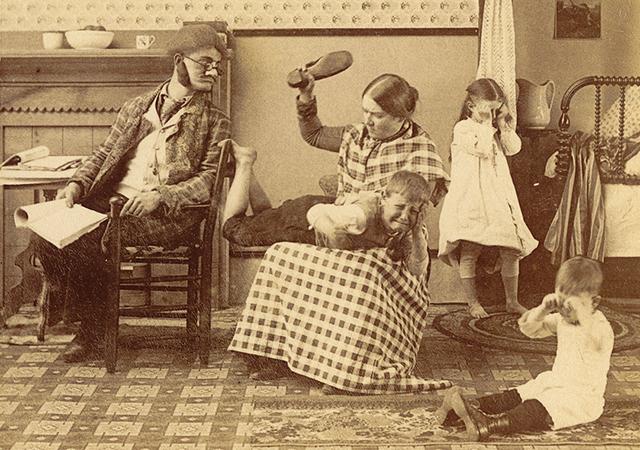 Creative Commons/Boston Public Library
Surveys suggest that as many as 80 percent of American parents use spanking to discipline their children, even, as inconceivable as it may sound, with infants.

Parents spank their children much more often than they admit and for trivial misbehaviors, suggest the just-published results of a study based on real-time home audio recordings.

The study also found that parents tend to strike their children out of anger and quite quickly after the children misbehaved — in other words, not as last resort.

Furthermore, the spanking doesn’t work. The children in the study who were hit or slapped by their parents typically misbehaved again within 10 minutes.

“From the audio, we heard parents hitting their children for the most extraordinarily mundane offenses, typically violations of social conventions,” said George Holden, the study’s lead researcher and a parenting and child development expert at Southern Methodist University, in a statement released with the study. “Also, corporal punishment wasn’t being used as a last resort. On average, parents hit or spanked just half a minute after the conflict began.”

If these findings sound familiar, it’s because Holden collected the data for this study a couple of years ago and publicly reported on them at that time. The findings were not officially published, however, until Monday, when they appeared in the Journal of Family Psychology.

Given the wide acceptance of parental corporal punishment in the United States, it seems important to highlight these findings again. Surveys suggest that as many as 80 percent of American parents use spanking to discipline their children, even, as inconceivable as it may sound, with infants.

It’s actually quite stunning that any parent today would use corporal punishment when the evidence overwhelmingly shows that this form of discipline is harmful, not helpful, to a child’s development.

To begin with, spanking has been found to be ineffective at reducing aggressive behavior. In fact, children who are spanked tend to become more aggressive over time, not less.

In addition, children who are spanked are at significantly greater risk of being physically abused.

Globally, at least 37 countries have banned all corporal punishment of children, including that inflicted by parents.

Previous studies on parental corporal punishment have relied almost exclusively on parents self-reporting how often and under what circumstances they use slapping or hitting to discipline their children. Such reports can be unreliable, of course, so Holden and his colleagues decided to conduct a pilot study using “real-time” audio recordings.

They recruited 35 mothers of children aged 2 to 5 years. The mothers’ average age was 34. Most were married (82 percent), white (61 percent) and had at least a college degree (61 percent). Most (60 percent) also worked outside the home.

For the six-day study, the mothers were instructed to strap a small digital tape recorder to their upper arm as soon as they returned from work in the evening, and to keep it turned on until their child went to bed. Daily compliance was high, although only about 62 percent of the recordings were kept on throughout the entire evening.

The tape recordings revealed 41 incidents of corporal punishment in 15 of the families. The number of incidents in a single family varied from one to 10. Twelve mothers, five fathers, and one grandmother delivered the spankings, and 18 children, ranging from 7 months to 6 years, received them. The median age of the children was 4 years.

The behavior of the adults who used corporal punishment frequently violated six “best practices” guidelines that advocates of the discipline (such as the evangelical Christian group Focus on the Family) claim make spanking “appropriate.” It should, they say, be used 1) infrequently, 2) selectively (for only serious misbehaviors), 3) calmly (not in anger), 4) as a last resort, 5) on the buttocks, and 6) no more than twice in a row (one or two hits).

“When all six guidelines are considered together in one incident, it is clear that parents were rarely, if ever, using [corporal punishment] ‘appropriately,’” write Holden and his colleagues. “The recordings reveal that most parents were responding either impulsively and/or emotionally, rather than instrumentally and intentionally.”

“Among the 12 mothers who engaged in [corporal punishment],” the researchers add, “the median rate was once every 6.3 hrs of interactions. In about three-quarters of the incidents, parents hit their children for extraordinarily mundane social convention offenses, rather than serious infractions, such as rights or prudential violations. Most poignantly, one child was slapped for turning pages of a storybook.”

Although the sample size of this study was small, its findings suggest that many parents weren’t telling the truth in previous surveys about corporal punishment practices in their homes. In a 1999 study, for example, parents of 2-year-olds reported that they spanked their children an average of 18 times per year.

The parents in Holden’s study were spanking their children, however, at a median frequency rate of 18 times a week — or 936 times a year.

Needless to say, that’s an appalling — and depressing — statistic.

Fortunately, parents can be persuaded to use other discipline strategies. Another study by Holden, published earlier this year in the journal Child Abuse & Neglect, found that briefly exposing parents to research findings regarding corporal punishment changed their attitudes about it.

Many parents spank with good intentions, says Holden. They just aren’t aware of how harmful corporal punishment can be. For parents who are looking for truly effective ways to discipline their child — ones that will ensure their child thrives as well as learns how to control undesirable behavior — the American Academy of Pediatrics offers some excellent tips and strategies on its website.

Parents often spank out of anger and for trivial reasons, real-time study finds