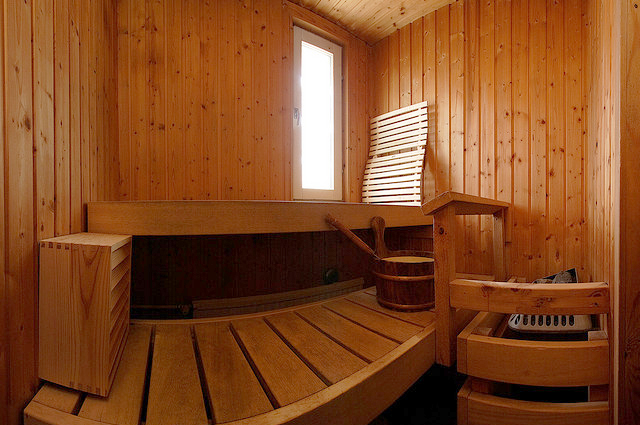 Creative Commons/Miika Silfverberg
The men who took saunas two to three times a week had a 24 percent lower risk of dying from heart attacks and other heart problems than those who visited the sauna only once a week.

Here’s some news that is sure to warm the hearts of Minnesota’s sauna-lovers: Researchers have found that regular sauna bathing — Finnish-style — is associated with living longer, at least among men.

The study, published earlier this week in JAMA Internal Medicine, used lifestyle and health data collected from 2,315 randomly selected men living in eastern Finland. The men had a mean age of 53 and a mean body mass index of 26.9 (only somewhat overweight) at the start of the study.

After analyzing an average of 20 years of the men’s data, the researchers made a surprising finding regarding sauna use: The men who took saunas two to three times a week had a 24 percent lower risk of dying from heart attacks and other heart problems than those who visited the sauna only once a week.

The association was even stronger for men who took saunas four to seven times a week. They were 40 percent less likely to die prematurely from heart disease than their peers who went only once a week.

The researchers say that more studies are needed to determine what the potential mechanism is — if there is one — that links sauna bathing and cardiovascular health. But it may have to do with increasing the heart rate. During a Finnish sauna, the heart rate can climb up to 100 or 150 beats per minute — a level that corresponds, the researchers point out, with low- to moderate-intensity physical exercise.

This study was observational, which means it can’t prove a causal connection between sauna use and the risk of a deadly heart event. Furthermore, it’s possible that other factors not identified in the study may explain the results. In other words, Finnish men who take saunas many times a week may be different from their peers in biological or physiological ways that reduce their risk of dying prematurely from heart disease.

It’s also important to point out, as the authors of this study do, that saunas can be harmful for certain people, particularly people with poorly controlled blood pressure.

In addition, this study’s findings apply only to Finnish-style saunas — dry saunas in which water is thrown on hot stones. The findings do not apply to steam rooms, hot tubs and other types of saunas, the study’s authors stress.

In a brief commentary that accompanies the study, Dr. Rita Redberg, a cardiologist and professor of medicine at the University of California-San Francisco, noted that she sometimes advises healthy patients who are considering unnecessary cardiovascular tests (such as a calcium scan or a carotid ultrasound) “to forgo that test and instead spend the money on something that he or she would actually enjoy, such as a massage or spa treatment.”

Of course, spending time in a sauna can be expensive. To gain regular access to a one, most people will have to join a health club — or build a sauna into their home. It’s much more cost effective to lower your heart disease risk with other, more tried-and-true methods: exercise regularly, don’t smoke, eat a heart-healthy diet and maintain a healthy weight.

You’ll find a link to the study’s abstract on the JAMA Internal Medicine website.