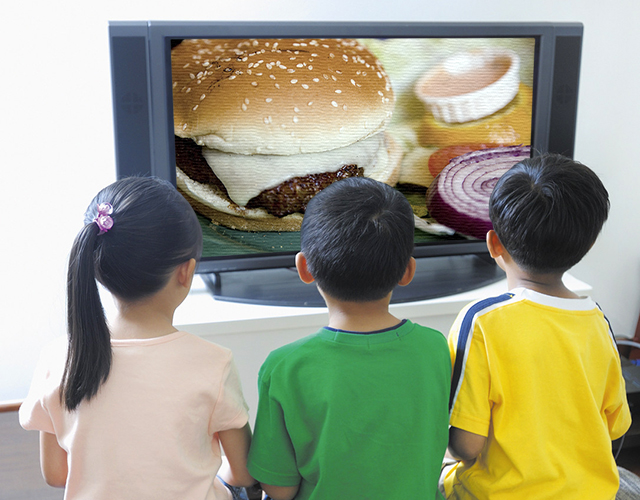 CORBIS/Creative Commons/pointnshoot
Four of every five foods advertised to children in the United States fall into “the poorest nutritional category.”

Several years ago, after a damning report by the Institute of Medicine took the food industry to task for advertising unhealthy foods directly to children, 17 of the largest U.S. food companies declared that they would adopt a program of self-regulation.

All future ads aimed at children would feature only highly nutritional foods, said the companies. They also promised to use cartoon and other licensed characters (advertising ploys that are particularly effective with children) to promote healthy foods only.

And how has that self-regulatory effort turned out? Not well — at least for the children. A new study reports that even though those 17 companies complied with the pledges they made, four of every five foods advertised to children in the United States — or 80 percent — fall into “the poorest nutritional category” (aka junk food).

In fact, the authors of the study say their findings show “that no significant improvement in the overall nutritional quality of foods marketed to children has been achieved since industry self-regulation was adopted.”

The study, which was published online today in the American Journal of Preventive Medicine, was conducted by researchers at the University of Arizona and the University of Pennsylvania. They compared 10 weeks of food ads that aired during children’s programming on broadcast and cable TV in 2007, before the self-regulation initiative began, with a similar sample of food ads that aired in 2013, four years after the initiative was fully up and running.

The channels include five broadcast networks (ABC, CBS, Fox, NBC and CW) and two cable networks (Cartoon Network and Nickelodeon). More than 100 shows were viewed during each year’s study period, representing 73 hours of content (in 2007) and 55 hours (in 2013).

The ads were assessed for length, product type, the use of licensed characters and the nutritional quality of the food being featured. To determine nutritional quality, the researchers used a system devised by the U.S. Department of Health and Human Services that characterizes foods for children as either “Go, “Slow” or “Whoa.”

“Go” foods are high in nutrients and low in calories, fat and added sugar. Vegetables, fruits, whole grain breads and cereals, non-fat milk, low-fat yogurt and diet soda are in this category.

“Slow” foods have a bit of fat and added sugar and are higher in calories. Examples include broiled hamburgers, nuts or peanut butter, waffles, most types of pasta, 100 percent fruit juice and 2 percent low-fat milk.

“Whoa” foods are high in fat, added sugar and calories and low in nutrients. These include fried chicken and hamburgers, cookies, ice cream, whole milk and regular soda.

Yet, those reductions had little connection — if any at all — with the food industry’s efforts to self-regulate its advertising, say the study’s authors.

“The drop is more likely related to a shift in marketing tactics that has seen food advertisers migrate to new media such as Internet-based advergames and social media, both of which allow them to reach children more cheaply and with less public scrutiny as compared with TV advertising,” they explain.

Even with the drop in volume, food ads still comprised almost 25 percent of all commercials on children’s TV programming in 2013, the study found.

As for the nutritional value of the foods being advertised, the study discovered that little had changed:

In addition, the study found that one of every eight food commercials (11.6 percent) targeted at children included a licensed character. That was about the same percentage (13.0 percent) as in 2007.

The 17 food companies who pledged to restrict their direct marketing to children did limit what products they advertised on children’s programming, the study found, but they made those decisions based on their own nutritional guidelines, not those established by public health officials.

And, yes, an argument could be made that the organization of foods within the “Go”/”Slow”/”Whoa” categories is not completely valid. Many health researchers and officials no longer see dietary fat, such as that found in broiled meat, nuts or whole milk, as necessarily unhealthy, as long as it isn’t accompanied by empty calories (white-bread hamburger buns) or added sugar (chocolate milk). And some research has linked diet soda, along with sugary “regular” soda, with wider waistlines and associated health problems.

But those categories were not contested by the food industry when it agreed to self-regulation of its advertising aimed at children. Furthermore, the companies’ approach to the issue raises the question: Do we want corporations rather than health officials to establish nutritional benchmarks for children?

What this study demonstrates  — whether or not we agree completely with the “Go”/“Slow”/“Whoa” classifications — is that the industry failed at what it promised: to stop selling unhealthy foods directly to children.

Time is running out

One factor behind that failure, say the study’s authors, is that about 30 percent of food commercials aimed at children are from companies that did not agree to self-regulation. Pizza commercials for one of these non-participating companies, Chuck E. Cheese, accounted for almost 15 percent of all the food ads in the study’s 2013 sample, for example, while the candy commercials of another non-participant, the Topps Company, comprised 9 percent of the ads.

How long will the food industry be allowed to self-regulate its children advertising? Time may be running out, as the study’s authors point out:

In the face of pleas for advertising reform, the food industry has achieved what might be labeled as baby steps. … Given that corporate profit concerns unavoidably mitigate more stringent industry-based reforms, continued reliance upon self-regulation to resolve this problem seems destined to yield only modest benefits. With a persistent national obesity crisis, the failure to act more strongly holds adverse implications for America’s children. As the IOM suggested in 2006, governmental restrictions on advertising practices will likely be required to end the predominance of unhealthy products in child-targeted food marketing. Such steps are increasingly being pursued by countries worldwide.

The study was funded by the Healthy Eating Research Program of the Robert Wood Johnson Foundation. You can download and read the study at the foundation’s website.