Minnesota’s adult obesity rate is 30.1 percent, up from 28.4 percent the previous year, according to the 16th annual State of Obesity report released on Thursday by the Trust for America’s Health (TFAH).

That rate means Minnesota is now ranked 30th — along with South Dakota — for adult obesity among all 50 states and the District of Columbia. That’s five slots higher than in last year’s report.

The national adult obesity rate is 30.9 percent, the report says. Colorado has the lowest rate (23 percent), while Mississippi and West Virginia have the highest (39.5 percent).

Just seven years ago, no state had an adult obesity rate above 35 percent. Now, nine states do.

“These latest data shout that our national obesity crisis is getting worse,” said John Auerbach, TFAH’s president and CEO, in a released statement. “They tell us that almost 50 years into the upward curve of obesity rates we haven’t yet found the right mix of programs to stop the epidemic.”

“Isolated programs and calls for life-style changes aren’t enough,” he adds. “Instead, our report highlights the fundamental changes that are needed in the social and economic conditions that make it challenging for people to eat healthy foods and get sufficient exercise.” 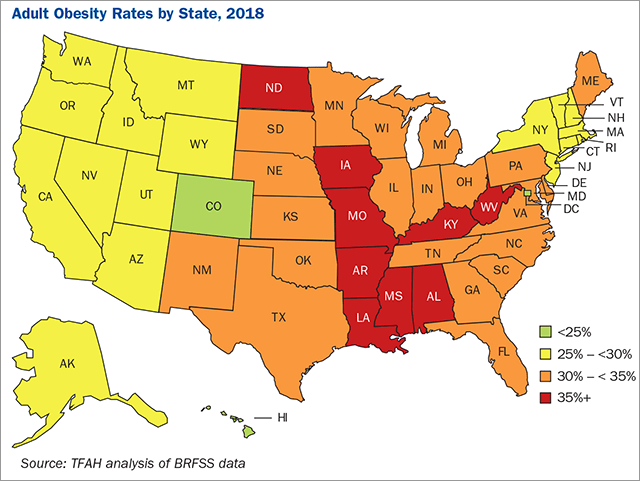 The State of Obesity report, which is funded by the Robert Wood Johnson Foundation, is based on TFAH’s analysis of the latest data from two federal sources: the Behavioral Risk Factor Surveillance System (2018 state data) and the National Health and Nutrition Examination Survey (2015-2016 national data).

The obesity epidemic is an urgent public health problem. Obesity takes a huge toll on individual lives, as well as on the U.S. and state-level economies.

Obesity is estimated to cost the U.S. economy at least $149 billion each year in increased medical expenses — half of which is paid for by Medicare and Medicaid. Minnesota’s obesity-related health care costs are estimated at $3.2 billion annually.

This year’s State of Obesity report focuses on how obesity levels are closely linked to social and economic conditions:

While obesity affects all populations, obesity rates are higher in certain populations where social and economic conditions contribute to persistent health inequities — almost half of Latino (47 percent) and Black (46.8 percent) adults had obesity in 2015-2016, which is 24 percent higher than Whites (37.9 percent). …

Currently too many Americans, particularly those who live in poverty and/or face racism and other forms of discrimination, face barriers to healthy behavior. All Americans — no matter where they live, how much money they make or what their racial or ethnic background is — must be able to make healthy choices for themselves and their families, and communities must support them in doing so through innovative programs and services.

The report points to two policies that have been shown to be effective in reducing obesity rates.

One is the creation of healthier food packages for the Special Supplemental Nutrition Program for Women, Infants, and Children (WIC), a federal assistance program for low-income pregnant and breastfeeding women and children under the age of 5.  The new food packages, which were introduced in 2009, are better aligned than past ones with recommended dietary guidelines and, thus, contain more fruits, vegetables and whole grains.

The other policy that appears to be effective — at least, in reducing people’s consumption of added sugar — is the increasing of taxes on sugary drinks. Such taxes have been shown to change consumer behavior, as evidenced by what happened in Philadelphia, the largest municipality to date to enact a beverage tax — a raise of 1.5 cents per ounce on all sugary drinks in 2017.

“New research on the first year of the tax found that consumers in the city purchased fewer sugary drinks on average, and retailers stocked more bottled water and less soda,” the report explains. “The effect on consumers was not uniform, rather it tended to primarily affect those who drank higher amounts of soda. This includes declines in total sugar consumption among children who drank more sugary drinks before the tax went into effect.”

The frequent consumption of sugary beverages, such as sodas, sports drinks, energy drinks and sweetened teas, is considered a major factor behind the obesity epidemic, both globally and here in the United States.

“Policies such as these are proving effective in changing behavior,” said Auerbach. “But, no single solution — however promising — is sufficient. Obesity is a complex problem and will need multi-sector, multi-factor solutions.”

The report includes a long list of policy recommendations for federal, state and local governments, including expanding efforts to increase the price of sugary drinks through excise taxes and making access to nutritious food a core tenet of all anti-hunger and nutrition-assistance programs, including the Supplemental Nutrition Assistance Program (SNAP).

Here are some additional recommendations in the report:

This year’s “State of Obesity” report includes an interview with Xavier Morales, executive director of the Praxis Project, a national nonprofit organization that works to advance health justice and racial equity. When asked what was the single most important policy action that needs to be taken to address obesity, Morales emphasized the need for more structural change.

“We need to be more intentional to ensure that investments are changing the underlying structures that promote health inequities and obesity,” he said. “The way we are currently approaching the obesity epidemic — in silos and with national campaigns/priorities that may not fit all local complexities, resources, and priorities — is creating “solutions” that often don’t address the structural causes of obesity.”

FMI: There is a link to the full report on TFAH’s website.