Although most American parents appear to have gotten the public health message about protecting their children from the sun’s harmful rays, they’re not always doing it effectively or consistently, according to the findings from a recent survey conducted by the University of Michigan’s C.S. Mott Children’s Hospital.

“The majority of parents understand the importance of using sunscreen, but they may not always use a high enough SPF [sun protection factor] or reapply as often as they should to protect their children’s skin,” says Dr. Gary Freed, the poll’s co-director and a paediatrician, in a released statement.

More than 3 million Americans are diagnosed with skin cancer each year — or about 9,500 daily, according to the American Academy of Dermatology. All forms of skin cancer can be deadly, but melanoma, which develops in the melanocytes, or cells that give skin its color, is considered the most serious form of the disease, claiming about 7,000 lives each year in the United States. Melanoma is one of the most common cancers in young adults, and, like other skin cancers, affects people with all skin colors.

Minnesota has the fourth-highest incidence rate of melanoma among all 50 states, according to a study published earlier this year.

For the survey, which was conducted in January-February 2020, Freed and his colleagues questioned a nationally representative group of 1,120 parents of children aged 5 to 12 about the strategies they use to keep their child’s skin safe from the sun.

As the report on the survey points out, the first line of defense against harmful UV radiation is covering up. Seven in 10 of the parents (71 percent) have their child wear a face-shading hat when in the sun, and two out of three (66 percent) have them wear long-sleeved clothing. 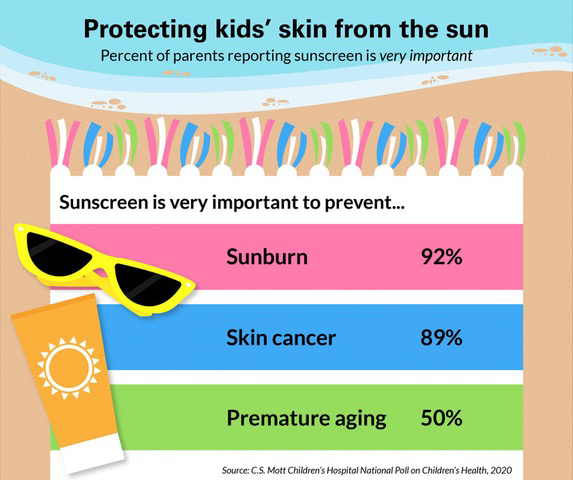 When it comes to sunscreen, nine in 10 parents say it’s “very important” to use sunscreen to prevent sunburn and skin cancer. Only 3 percent say they don’t use any sunscreen for their child. Yet one in 10 parents (11 percent) also acknowledge that they don’t choose sunscreens based on a specific minimum SPF (sun protection factor).

Experts say that to get the most protection from a sunscreen, parents should use one with a SPF (sun protection factor) of at least 15. If the child has fair skin, that SPF should be even higher: 30-50.

Needs to be reapplied

“Parents should be aware that UV rays from the sun can reach their children on cloudy and hazy days, not just on bright and sunny days,” says Freed. “Children need protection regardless of the amount of sunshine.”

To be effective, sunscreen needs to be applied every couple of hours — and more frequently if the child is in the water because, as Freed emphasizes, “no sunscreen is waterproof.” Products labeled “water resistant” are required to last only 40 minutes when swimming or 80 minutes while sweating.

Freed and his colleagues recommend that parents use a broad-spectrum sunscreen (one that protects against both UVB and UVA radiation) with a minimum SPF of 15 to 30. They should also try to limit their child’s exposure to the sun during peak intensity hours: 10 a.m. to 4 p.m.

“People may believe their children are adequately protected from the sun, but if the SPF is too low or they’re not reapplying often enough, kids are still at risk of sunburns,” says Freed. “Sunscreen is a key preventive tool against burns and skin cancer, but it must be used properly to be effective.”

FMI: You can read the full report on the survey at the C.S. Mott’s Children Hospital’s website. You’ll also find sun safety and protection tips for parents at the website for the American Academy of Pediatrics.

Parents frequently fail to use sunscreen effectively to protect their children, survey finds