Well, this is it: This week’s column will be the final Stroll I write for MinnPost. For the last five years, I have written just shy of 250 of these things. At about 1,100 words each, that’s what, somewhere in the vicinity of 275,000 words? That’s about the length of “Crime and Punishment” with a copy of “All Quiet on the Western Front” stacked on top of it. Five years is a long time for a weekly column, and five years feels like a good time to end it in this particular iteration.

I’m not doing so for any lack of ideas or a paucity of places to walk – I still average a handful of emails a week from readers with suggestions for columns, and any number of them would make a great column. In addition to those, it’s not as though I could run out of places to see out in the Twin Cities if I wrote for another five, 10 or 20 years. There’s still a multipage document in my Google Drive with embryonic column ideas that may or may not come to fruition at some later date somewhere or other: Virgin Mary shrines, moon rocks, Masonic temples, Snappy Signs on Snelling Avenue, Keljik Carpets on Bryant Avenue, lost dog flyers, the calligraphic signage at the Islamic Dawah Center on University, the Vermillion River Bottoms in Hastings. There is also a note to investigate the stacks in Rosemount, but I missed my chance with those, as they were demolished late last year. Sean, a guy I met writing the column about the STUDIiYO23 shop in Uptown, actually grew up nearby and offered to take me out there for a tour a few years ago. Sorry I dropped the ball on that, Sean. Apparently, one of the reasons they tore it down is because the local kids were partying too hard inside. 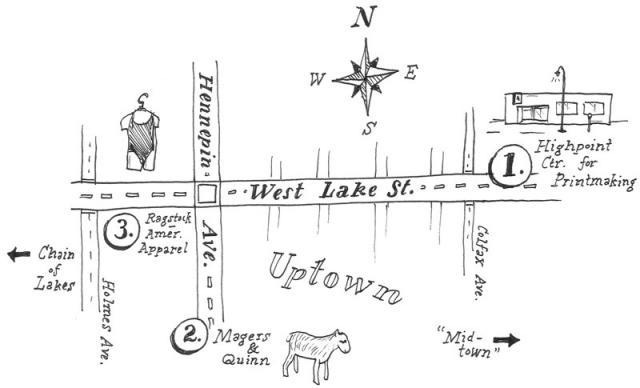 I’m not going to disappear from MinnPost entirely. I’ll still be writing columns occasionally, and they’ll more than likely cover a lot of the territory I covered in The Stroll – places, people, histories. My hope is that these pieces will be a little longer, and a little more in-depth. In addition to that, I’ve got some book proposals in the works, and my byline will turn up every so often in a few other places around town. I’m not going anywhere.

Truth be told, I didn’t have much of a résumé when I started writing here in 2012, at least as far as weekly publication was concerned – a bunch of blog posts on Tumblr, a handful of pieces online, and a few art exhibition catalog essays. To the enduring credit of my editor, Susan Albright (and MinnPosters Corey Anderson and Kaeti Hinck, now at the Washington Post, who almost certainly put in some good words for me), MinnPost not only brought me on, but gave me complete freedom to write about whatever I wanted with not a lot of editorial dicta coming down from the top. The basic idea I pitched Susan back then was that, every week, I’d go out into some neighborhood, walk around, and report back what I’d see, whether it was fine art, architecture, graffiti, advertisements, historical markers, handmade signs or something else. Not hidden aspects of the cities – a word, like “discover,” I don’t really care for – but things that were in plain sight. I wanted to highlight things that anyone could go see on their own, without necessarily paying admission, requiring elaborate directions, having a friend who works inside let them in, or jumping a fence. (With a sense of dread that this wouldn’t quite be enough on its own merits, I also agreed to throw in a hand-drawn map most weeks.) 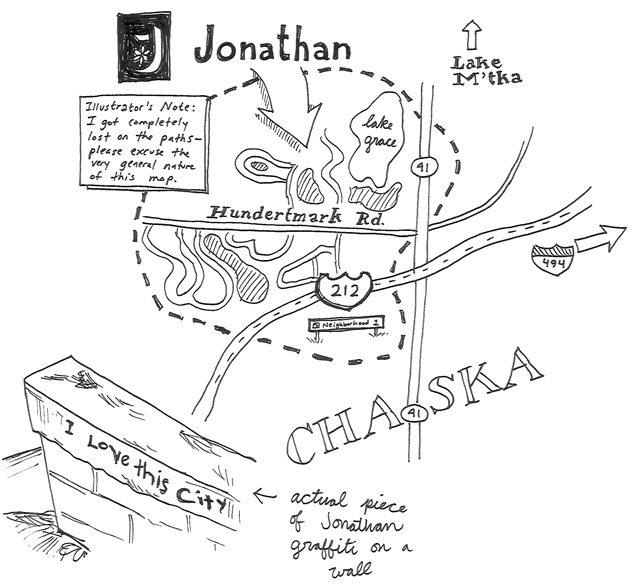 That was the original directive, and more or less, that’s what I’ve tried to do. MinnPost has always trusted me to take you with me, no matter how arcane (or mundane) the topic was. Looking back, I’ve probably written about more decaying suburban office parks than anyone not employed for the commercial real estate round-up section of a monthly business journal rightfully should.

This freedom also gave me the opportunity to explore topics that might never have occurred to me without a regular weekly venue for them. Some of my favorite columns have been those that were probably too weird, unresolved or unclassifiable to make it as full-blown features. Some are, if I’m being honest, topics that might never have occurred to me at all without the clarifying panic of a weekly deadline crashing down on a Sunday night: the archaic classification systems at the Central Library, the culture of the Sunday Hudson booze run, the regional term “city desk,” the lost alleys of 19th-century downtown Minneapolis, the highlights of the Mississippi River beaches, the mysteries of the New Town of Jonathan, the imaginary Minneapolis subway system of the 1970s, the Springfield/Shelbyville conundrum, a walk under Interstate 94. 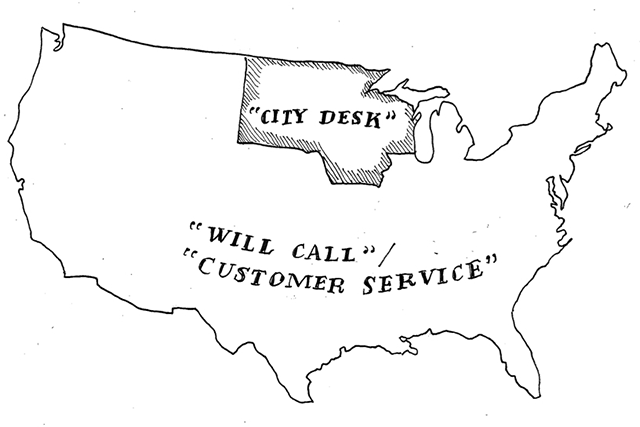 MinnPost illustration by Andy Sturdevant
It’s easy to find references to city desks in the Twin Cities, Greater Minnesota, and in the Dakotas.

A lot of credit here goes to you, the reader, as well. Comments sections get a bad rap, and rightfully so: Most of them are really terrible. Not here, though. Nearly every week, someone would chime in with a personal anecdote about the place I was writing about that would add such richness and depth to what I’d reported – so many times, I’d read one and think damn, I wish I’d known that before I published the piece so I could’ve incorporated it. If you go back over the 13 pages of The Stroll archived on MinnPost, the best parts of some of the columns are the comments – if you scroll down to bottom of something like the piece about Prosperity Avenue, or the origins of Snelling Avenue, or the bathroom graffiti at Hard Times Café, or the Hillcrest Knoll Park flooding memorial, the contributions below the text add a layer of first-person experiences and anecdotes that research and observation can’t quite get to.

As you know from reading over the years, spinning off into moody, sun-dappled elegies is a particular specialty of this column, so I am going to try to stop myself from flailing too much further into that territory. I will simply end by thanking you for your comments, your emails, your suggestions, your contributions, your corrections, your criticisms, your accolades, and, in many cases, your company on some of these walks for these past five years.

Writing a weekly column focused on looking made the experience of being out in the world a slightly heightened one, even more than it had been before. I’d always tried to notice the world around me, but working on The Stroll cranked up that impulse into something approaching a mania. Nearly anything I’d look at, no matter how tiny or tucked away, would prompt a light bulb, an idle thought of “What’s interesting here?”

My hope is that if this column has accomplished anything, it’s that you, too, have found yourself cultivating a similar response when you’re walking around Minneapolis and St. Paul. I hope that I’ll see you out there.

From graffiti and handmade signs to the weird and unclassifiable, it’s been all about looking at what’s in plain sight