“My story? I’m a tenant, I live in the Steve Frenz’s apartments and I’ve been trying to have stable housing,” said Chloe Jackson, a long-time renter in south Minneapolis.

Jackson, who has been working for years with the Minneapolis renters advocacy group InquilinXs UnidXs por Justicia on increasing renters’ rights, has been encouraged by a new set of proposals in Minneapolis that is designed to give more security to the city’s most vulnerable tenants.

“People have life happen to them,” Jackson said about why housing stability is such a persistent problem. “They have emergency situations, or a family member passes away or something like that. And if they do fall behind and the landlord goes to evict them, they have to come up with $3,000. The first month’s rent, the last month’s rent, and a security deposit. That’s too much.” Then there is what happens after an eviction.

The struggle between rent and circumstance is familiar territory for anyone who’s read about evictions lately. Three years ago, when sociologist Matthew Desmond’s award-winning book on evictions in Milwaukee came out, the narrative shed new light on how poor people  survive in most American cities.

The book’s main characters, mostly African-American women, struggle to escape the complex cycle of poverty and substandard housing in their Milwaukee neighborhoods. As the stories unfold, small circumstances, like an unexpected funeral, or allowing a friend to stay on a couch, throw the book’s subjects into eviction courts, where added fees can lead to an endless cycle of instability.

Milwaukee and Minneapolis have a lot in common when it comes to segregation and housing pressures. Both cities routinely rank in the top of lists of U.S. cities with the largest gaps between white and black citizens, and a lack of stable housing is a big reason for that disparity.

The Minneapolis equivalents of Desmond’s northwest Milwaukee neighborhoods are probably two ZIP codes in north Minneapolis, around the Fulton, Jordan, Folwell, and Hawthorne neighborhoods. These parts of the city have some of the most entrenched poverty, combined with a legacy of racial segregation and unequal investment. The area has also been the focus of a recent draft report from the University of Minnesota’s Center for Urban and Regional Affairs (CURA) released May 30, detailing facts and stories from renters and landlords from the two ZIP codes. Despite accounting for only 8 percent of the county’s rental units, these neighborhoods are home to half of its eviction proceedings.

The report, “The Illusion of Choice,” whose chief investigator was Brittany Lewis, senior research associate at CURA, highlights the experiences of women and men who have struggled to find stable housing in the area. One detail that jumps out: Many of the tenants surveyed were so desperate to find a place to live that they had little choice in their apartment. And when the survey participants were evicted from their homes, often for falling behind on rent, over half experienced homelessness.

Instability in the housing market is nothing new, especially for people dealing with poverty, racism, or other barriers. But it’s an issue that is rarely covered in press accounts, and often the issue only seems to emerge when there’s a particularly tragic event, or when visible homelessness is on the rise.

“So these ideas have been around for a while,” said Jeremiah Ellison, Minneapolis City Council member for the Fifth Ward, who represents the area in the CURA study. “It’s no secret that folks with [evictions] on their record, or criminal records, often are iced out of the housing market for extremely long periods of time.”

The focus on evictions, technically known as an unlawful detainers (UDs), is one of the new efforts behind the drafting of an ordinance proposal that Ellison and Council President Lisa Bender are floating at City Hall.

The proposal stems from a community meeting that Ellison held last fall, what he called a “renters assembly” that brought together as many area renters and landlords as possible to discuss how to solve ongoing issues of housing instability.

Unlike most of the city’s public engagement approaches — which tend to focus on the needs and concerns of homeowners, who are often perceived to care more about their community — this one was specifically geared toward renters, a group that together makes up over half the city population.

For Ellison, this was a deliberate approach.

“[Reaching out to renters] becomes a kind of a bat signal,” Ellison explained. “People see that and they know that their voices are going to be welcomed. They are not going to be ignored, and their commitment to the community is not going to be questioned. In a city that is majority renter, it’s important that we not make assumptions that someone who owns is more invested in a community than someone who rents.”

Coming out of the meeting, Ellison and Bender, who held a similar meeting in her south Minneapolis ward, put together a draft proposal that they hope will stabilize housing affordability and availability for people who often have the most trouble finding housing.

The proposal has two key suggestions. The first is a so-called “limited lookback” rule, where most landlords, while screening tenants, would be unable to consider information about criminal records or evictions past a certain point in time.

“We want to make sure that the mistakes of the past don’t end up becoming a life sentence for folks moving forward,” said Ellison. “Stable housing and dignified housing also prevents people from falling back into habits and lifestyles that led them to have that criminal record in the first place.”

The second part of the proposal involves setting a cap on how much landlords can require for leases and deposits. Landlords would be limited in how they can use so-called “double deposits,” where tenants have to pay the first and last month’s rent in advance. If so, the security deposit would be capped at half of one month’s rent, lessening the up-front burden for folks looking for housing.

The issue of housing stability, and the balance between renters’ and landlords’ rights, has grown more acute with the ongoing housing shortage citywide — which puts added pressure on the city’s housing stock and has placed vacancy rates below the “healthy” 5 percent threshold for years. In general, the shortage gives landlords more power over tenants.

Correction and update: Until Wednesday, drafts of the ordinance existed but had not been circulated to the general public. They are now available here (click on Renter Protection Policies).

Ellison and Bender have not reached the point of scheduling a public hearing. Instead, Ellison said they are open to receiving feedback from the public about the proposed changes, and encouraged anyone interested to email or call their offices.

So far, the City Council is receiving plenty of feedback from the city’s landlords. A trade industry group, the Minnesota Multi Housing Association, has already launched a coordinated effort to stop the ordinance. The campaign involves a website and lawn signs, and hot pink lawn placards calling for SAFE & AFFORDABLE NEIGHBORHOODS MINNEAPOLIS are on display now in apartment yards around the city. 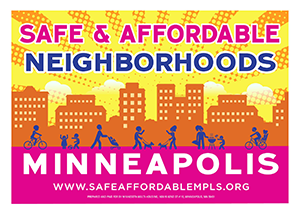 “Speaking as industry leaders here, there’s a reason everyone is so mad and frustrated,” said Joe Abraham, an MHA board member who owns 250 apartments in Minneapolis. “City policymakers who don’t know the scope of the problem come to us and say ‘you have a problem,’ but we don’t even know what the problem is. Even worse, they have come up with a solution based on stealing from other cities. It’s frustrating and disingenuous to not even involve the experts.”

The MHA is upset about not being included in the ordinance drafting process, and has released a flurry of public letters and press conferences to outline their problems with the proposals. For one thing, they believe that the ordinance will only reduce the amount of housing being built around the city, tightening an already tight market.

“It makes it more expensive to operate,” explained Bernadette Hornig, an MHA board member who owns a Twin Cites housing company. “To meet your debt-service coverage ratio, a lot of projects are underwritten very closely by big national lenders. Well, they’re going to have a hard time securing financing.”

According to Hornig, the proposal will also raise costs of insurance. With a riskier tenant pool, she predicts insurance costs could rise by 40 percent, further reducing the amount of housing built in the city. The MHA would rather see the city focus on increasing housing supply, rather than introduce new regulations around tenant screening.

“The real issue in this city is there is essentially no vacancy,”said Abraham. “You’ll hear about the vacancy rate, but that’s all at the higher-end luxury Class A apartments, the new stuff. For any developed, NOAH [naturally occurring affordable housing] or deep affordable categories, we’re really at no vacancy. That’s a problem that everyone has identified, and we’re all in sync with that. There’s only one way you solve that problem, and it’s right from macroeconomics class. You gotta produce. All this other stuff to me, it’s total noise.”

Hornig, Abraham, and the rest of the MHA are hoping Minneapolis decision-makers start over, and the lawn sign campaign is intended to connect with enough renters around the city and put pressure on the City Council. “These [ordinance proposals] need to be thrown in the recycling bin,” declared Abraham. “They should come back and put in some real work, and determine what the problem is here. Then you go to the sector that can solve that problem, the experts that are doing it, and let us know how we can partner with you to solve the problem.”

The hostility between the landlords and the City Council comes as a bit of a surprise to Council Member Ellison, who insists that landlords have had a seat at the table throughout the process.

“We’ve had stakeholder meetings with both for-profit and nonprofit landlords, and we’ve gotten feedback,” Ellison said. “I know the MHA has taken the stance they don’t want to give feedback on these issues, that they’d rather we did not pursue these solutions at all. But up until this thing is passed, we’re open to hearing anybody’s feedback and taking meetings and doing our best to incorporate them into a strategy that address the problems that renters are facing, and addresses the concerns that landlords have.”

For her part, Chloe Jackson, in South Minneapolis, is encouraged by the proposals. She sees them as a long-overdue balancing of the scales that have been tilted against vulnerable renters for years.

“Yes, I would love to see more of this,” Jackson said. “Renters, we don’t have rights. And so them allowing this, just telling us about this, it’s amazing.”