If St. Paul streets proved anything in November 2020, it is that arc of bicycle trail construction is long, but it bends toward progress. This fall, St. Paul quietly unveiled over 20 miles of new bike projects, over half of which are protected, off-street trails, the gold standard for urban bicycling. The new links have been years in the making, and stitch together the city’s bike routes in a whole new way.

“We had the culmination of a lot of projects that have been in the works for several years, including our effort to invest in the St. Paul Grand Rounds,” said Russ Stark, the Chief Resilience Officer for Mayor Melvin Carter’s Office.

Unless you’re a rare November cyclist, you might have missed the news. Apart from a gathering along Ayd Mill Road one Saturday morning, there hasn’t been much fanfare due to the ongoing pandemic. The other reason for a lack of limelight is the annual construction calendar. City street construction routinely finishes up after Halloween, and all the new bike trails debut just in time for the short, icy days of a Minnesota winter.

Come springtime, people riding bicycles in St. Paul will be in for a real treat. There will be lots of new routes to explore, and for the first time ever, a century-old vision for a “grand round” tour around the city’s lakes and parks will be possible. 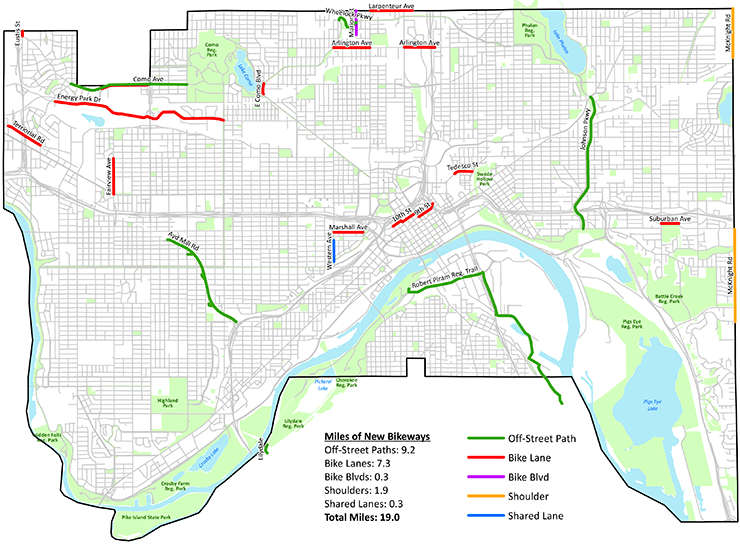 Here, briefly, are all the newly completed projects:

It’s hard to overstate the long time scales for transportation planning. For example, as part of my role in the City Planning Commission, I began attending the city’s Transportation Committee almost nine years ago. My very first meeting was the Piram Trail, which had received funding and was being planned. For various reasons — Russ Stark described them as “a lot of tricky negotiations over little slivers of land, easements, and access”— nearly a decade elapsed before the trail was finally completed this fall.

A ten-year time frame is longer than most, but almost all bike projects take at least a few years to get funded, planned and completed. It means that bicycling advocates often have to be patient before they can enjoy the fruits of their labor.

“The lead time is so long on federally funded projects, but that’s how the process works,” admitted St. Paul Public Works engineer Reuben Collins, describing the $5.5 million grants that the city received for the routes. “It’s the result of a lot of years worth of ground work, and lot of projects just coming together this fall. A lot of really fantastic protected bikeways and regional trail facilities that are pretty attractive for everyone: families, kids, and all sorts of different types of users.”

Two of the big city projects — the Como and Johnson “Grand Round” — represented the culmination of a process that dates to the 1800s. The current incarnation began back in 2014, under then-Mayor Chris Coleman, who used a one-time budget windfall to launch the city’s bike plan. That funding went to plan for a contiguous “grand round” loop and an off-street downtown bike network. That decision laid the groundwork for today’s new trails, and after years of patient planning, the 2014 vision has become a reality.

The difference is particularly striking along Johnson Parkway, a wide linear right-of-way that lacked sidewalks for a century.

“People didn’t have a lot of reason to go to the parkway,” said Collins, who is a big fan of the new project. “There were no sidewalks, no trails… despite it being a linear park. My hope for that project is that, by constructing a trail, people on both sides of parkway will use it, bump into each other and have the kind of chance meetings that happen on sidewalks and trails.”

Besides taking a long time, bike projects also don’t happen all at once, especially because of the slapdash way that transportation funding works in this country. Eventually, though, after enough small bits are put down into the map, they can come together into a coherent whole.

“Often when we propose bike lanes, its a disconnected segment of the street,” admitted Collins, when I asked him about the long duration of bike planning. “Each time, we wrestle with question of whether or not it really connects to anything.”

That’s a common critique for projects like the Ayd Mill trail, which today is just a mile-long spur in a valley. But years from now, like many of the bike lanes built today, it could be a critical part of an amazing bike route across the city.

“It’s important to move forward anyway and seize opportunities when the present themselves,” Collins explained. “We we do end up with intermittent periods where don’t have the best connectivity, but you only build a bike network by building the bike network.”

Riding the Grand Round

When I chatted with him, Collins suggested riding the newly complete Grand Round as a great demonstration of all the recent progress. Recently, on an unseasonably warm November day, I did just that.

I’ve been bicycling around St. Paul for decades, and even for me, the new connection was a revelation. Coasting south through the East Side from Phalen to the glorious overlook on Mounds Park, and then to the long steep descent to downtown felt like visiting a whole new city.

Here’s what I recommend: the next time the weather seems amenable, begin near the city border at Raymond Avenue, hop onto an off-street trail on Como Avenue, and bike east through Como Park, along the Wheelock Parkway trail to Lake Phalen, down Johnson Parkway to Mounds Park, and into Lowertown. You’ll go the whole way almost never biking in mixed traffic. The experience is a real pleasure, especially during a pandemic that’s kept everyone cooped up in homes and apartments.

After major upgrades to St. Paul’s routes, cyclists are in for a treat