One evening in May of 2018, dozens of people gathered near the corner of Summit Avenue and Dale Street to ride bicycles en masse down Summit’s well-used bike lanes. It was a memorial ride for Alan Grahn, a 71-year-old retired upholsterer who had been killed by a turning school bus driver while bicycling down Summit a few weeks before.

Memorial rides are never fun. Everyone rides in silence and you spend much of the time contemplating vulnerability, the everyday sense that any moment crossing a busy street could be your last.

It was not a coincidence that Grahn was killed a block away from where a 51-year-old woman named Virginia Heuer had died a decade earlier, also hit by a driver. The inconvenient fact is that Summit Avenue is both one of the city’s most popular bike lanes and also badly out of date, lacking many of the safety improvements commonplace in other cities.
All that could soon change, as the century-old street is due for reconstruction next year. It gives St. Paul a golden opportunity to improve the street for the next generation and turn Summit Avenue into the kind of asset that it was a generation ago.

It’s a little known fact that the Summit Avenue bike route is older than many of the mansions along the street. It appears as a key route on the 1899 map of the St. Paul Cycle Path Association and is marked as a park path on the first St. Paul Parks maps from 1909. 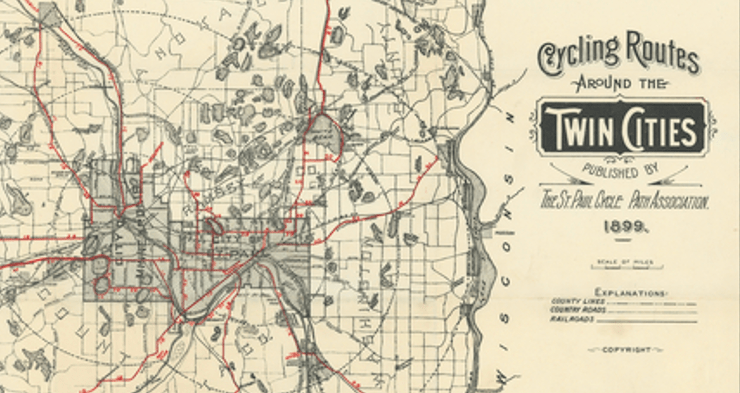 That’s ancient history, long before private motor vehicles took over city streets. Another fun fact is that the Summit Avenue bike lane is the oldest striped bike lane in Minnesota, dating back to 1992.

At the time, in-street bike lanes were a new thing in the state, in an era when “vehicular bicycling” was still the norm. There were often heated debates about whether bike lanes improve safety, or whether people were better off “taking the lane” and cycling amid drivers.

“If this is a roaring success, you will see more of it,” a St. Paul traffic engineer told the Star Tribune, referring to the then brand-new idea of striping paint just for bicycles.

Well, it was, and we have. For decades, Summit Avenue has been one of the top bicycling routes in the city, second in citywide traffic counts only to the paths along the Mississippi River Boulevard. But a lot has changed about traffic engineering since 1992, and today’s designs leave a lot to be desired.

“The current bike lanes aren’t very wide,” said James Slegers, a member of the Summit Hill Association who lives a few blocks off the street. “People using those lanes are either pressed pretty close to vehicles; or, in the winter, those lanes disappear entirely as the snow builds out toward the center of the road.”

The intersections are also problems, as turning traffic around Summit Avenue has led to repeated crashes. After Alan Grahn’s death, the City Public Works department added buffers to one portion of the street, where the car travel lanes were an absurd 19’ wide, far larger than a freeway lane (and entering Kramer from Seinfeld territory). The city painted a 4-foot buffer between the bike lane and passing cars, but there’s still a lot of room for improvement, literally and figuratively.

The other truth about Summit Avenue is that it’s in terrible shape, one of many St. Paul streets in desperate need of expensive reconstruction. As any city driver knows, you can only patch potholes for so long before the foundation itself starts to erode, and the asphalt becomes an almost fractal surface.

So it’s a relief that the crumbling Summit Avenue will be fixed in 2023, giving city engineers carte blanche to redesign its features. As with the recent projects in Minneapolis, the reconstruction is a once-in-a-lifetime opportunity to start from scratch with the street layout.

“It’s our premiere bike street,” said Andy Singer, the co-chair of the St. Paul Bicycle Coalition. “Since they’re rebuilding it anyway, we should discuss putting the bike lane back in a different way, because it won’t cost anything [extra].”

The proposals put forward by the city and the Parks Department show two alternatives, both of which would be vastly better than the existing in-street lane. The first would consolidate today’s lanes into a two-way bikeway on the north side. It would look and feel similar to the stretch of Como Avenue east of the fairgrounds, a popular recent link in St. Paul’s Grand Rounds. The other alternative offers curb-separated, one-way paths set on either side of the street, in between the parked cars, the boulevard and the sidewalk.

Which design is better is something I go back and forth about: In general, one-way designs are safer, but the two-way path is easier to maintain in winter. A lot depends on the details, such as what happens at intersections. Importantly, neither design would expand the existing roadway, with the extra room coming from narrowing the crossing width and removing some on-street parking.

I grew up a block off Summit Avenue, and have biked its length hundreds of times over the years. I can also recite a litany of historic facts about the street and how it became a row of mansions as the city expanded west with the streetcars.

During an online meeting to discuss the new street designs this week, many attendees had been informed that the bike path would destroy the street’s historic tree canopy. A few weeks ago, a group called the Summit Avenue Residential Preservation Association (SARPA) sent out a letter to neighborhood residents warning that plans for the bike path “may include the removal of nearly 400 trees” east of Lexington.

SARPA, one of St. Paul’s more obscure legacy acronyms, is a relic of the George Latimer administration, dating to an era when Cathedral Hill was “in decline” and Summit mansions were being converted into apartments or institutional facilities.

Of course, the claims in the alarming letter were not true. Neither of the city’s proposals would expand the roadway, and no trees would have to be harmed. But the misinformation fueled concerns during the meeting and turned the unmoderated discussion into a chaotic shouting match, an unfortunate turn of events for folks who want a safer street.

Back in 2018, when the cyclists gathered to remember Alan Grahn, someone in an SUV began honking their horn furiously and revving their engine at the passing cyclists blocking the intersection. I watched Mayor Melvin Carter personally turn around and speed to the angry driver, calm tensions and explain what was going on.

It seems like this case might also require city leaders to step in and quell overreactions from folks in the neighborhood needlessly worried about the trees. Hopefully, officials can correct the record, get a safer design in place, and make sure that Summit Avenue remains a welcoming gem for the next hundred years.